Exclusive Interview with Peter Wartman, author of "Over the Wall"

I anxiously awaited the release of this graphic novel after I logged onto UncivilizedBooks.com and saw the cover. I flipped through a few photos and my brain told me that I needed to read this book. I just NEEDED it. So, I pre-ordered myself a signed copy as Peter most generously agree to do for the pre-orders. Here is my exclusive interview with Peter Wartman regarding his first graphic novel Over the Wall.

Froggie: First of all, allow me to say thank you for agreeing to do this interview.  I have a few questions mostly related to the plot but please tell me how you developed the world in "Over the Wall" and what your primary inspirations were in it’s creation?

Peter: Thanks for setting up the interview!
The world in the comic developed as I was drawing the story, mostly to serve the needs of the plot. The first image I had of the comic was a girl standing on top of a wall, looking into a huge, abandoned metropolis, and all I did was start asking questions about what was going on. Why was the city abandoned? Why did she need to go into it?
The look of the city developed at the same time: my objective was to create a maze-like place you could easily get lost in, hopefully reflecting some of the themes of the story. 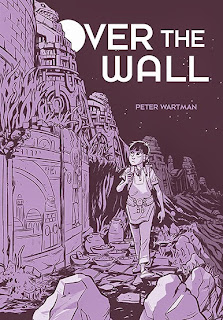 FQ: I love the tribal  themes in the world you created. Can you tell me what specific cultural influences (if any) that you were drawing from?

P: It's a bit of a polyglot mix. There's a bunch of Mesoamerican stuff in there, but also quite a lot of Roman influence (all those domes, for example). I wasn't really trying to invoke any one culture, and, hopefully, I was able to build something with its own flavor.

F: I  personally have a great appreciation for black and white comics. Over the Wall ‘s artwork reminded me of Frank Miller’s Sin City due to the use and absence of color. Was there a reason you decided to present the world to the reader highlighted in purple?

P: Using pure black and white forces you to focus on lighting and composition, which has always been what I've been most interested in. Comics like Mignola's Hellboy (or Miller's work) are great examples of this, Mignola especially can evoke complex scenes with just a few well-placed areas of white in a sea of black. It feels like getting down to the core elements behind what makes an image work (contrast, value, composition) and I really enjoy that.
The purple color is maybe a bit of a cheat, given these influences—it gives me another layer to indicate lighting and texture with—but I think it gives the comic a bit more weight. The purple color itself came about by mistake: I'm partially colorblind, and my attempt to pick a blue hue ended up with a lot of red sneaking in. My publisher liked the color I picked, however, so we ran with it.

FQ: Throughout history in humanities myths and legends, names hold power over good and evil alike. What is the significance of names in your story? Why does the main character remain nameless?

P: Names are the way we make the world comprehensible, the way we compartmentalize and control it (or try to, anyway). When you give something a name you pin it down and assign all kinds of attributes to it. Calling the monsters in the comic “demons”, for example, brings with it all sorts of cultural baggage and prepares the reader to think about them in a certain way. Names are powerful things.
I left the characters nameless for most of the story partially due to the rules of the world they inhabit—giving your name to a 'demon' is a bad idea—and partially because the story is about searching for identity. Giving the characters a chance to show who they are before I saddle them with names seemed to fit.

F: I am terrible for trying to predict the end of stories while I’m reading them. I had immediately decided that our main character did not locate her brother when she ran into the boy in the city. What is the truth about this plot point? Is the boy she found actually her brother?

P: Leaving that question open was intentional. I think the question holds even if the person she found really was her brother at one point: if he has no memories, is he really the same person?
I like it when stories leave a lot of lingering questions and don't tie things up neatly at the end (although I hope it feels like the comic did have a clear ending). I also think that stories are always a collaboration between the writer and the reader, and whatever interpretation the reader brings to the table is as valid as my own.

F: Did you write this story with the intention of it being readable for an audience of all ages?

P: In a way it just sort of happened. This is the kind of story I like to tell, so I just tried to write something that would keep me interested. I'm happy to be put in the all-ages category though!

F: What are the chances of a sequel to Over the Wall?

F: As this is your first graphic novel, what are your plans for the future? Are you currently working on or developing any new stories?

P: I'm not quite ready to announce it yet, but my next comic is in the works. I'll be posting updates on my site (www.shipwreckplanet.com), so if you want to keep up to date I'd check there. 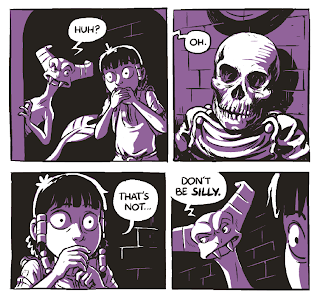