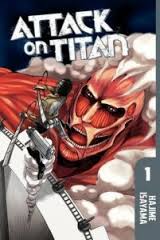 I have been pressured to read Attack on Titan for a while. Well, to be honest I was be pressured to watch the anime. Since I don't care to spend my time sitting mindless in front of a television screen, I opted for the manga.

Manga and I have a strained relationship, not unlike my relationship with first person shooters. I like it, but I have trouble keeping up. (I'm still the shittiest medic on Battlefield 3 and playing with one of the best clans on the PS3 servers). That being said, I'm relentless in my struggle to be good at first person shooters and I'm persistent in keeping up with popular manga. I don't blog on EVERYTHING I read but I thought this one deserved a spot.

Attack on Titan is the chosen English title for the manga Shingeki no Kyojin, which literally means "Advancing Giants". I am going to agree with the opinions echoed by my friends that the English title misrepresents the manga. I suppose they have changed the title to fit as some sort of battle cry for humanity in the book, rather than a description of the plot. Advancing Giants is really what the deal is here. In this universe, 80 % of humanity has been devoured (literally devoured) by these giant Titans (I'm having Evangelion flashbacks). This is obviously no new concept. Japan loves creepy man-eating giants of all shapes and sizes. Giant lizards, giant mecha, giant tentacles, giant vagina monsters... Giants for everyone! If I were to have a giant anything, it would be one of those giant, 6 footed elephant like creatures from Multiple Warheads. The ones that carry a palace on their back!

For the most part, I find this book entertaining enough. Hey, I enjoy seeing people eaten by giant monsters! I have a sick idea in my head of what is considered entertainment. Yet, I didn't have the same emotional response to the main characters mother being trapped under her own roof as I did when say- Barefoot Gen lost nearly his entire family under the roof of his house during the atomic blast that flattened Hiroshima. I guess that's the difference between tragedy in fiction and tragedy based on real-life events. What I mean is, the book is not exactly an emotional roller coaster. It does have a lot of action.

I wanted to make a little comment about the artwork as well. In what I can only assume was an attempt to create gaunt, under-fed characters, the author has made everyone look eternally shocked and surprised! (If not constantly frightened looking.) This is due to the wide-eyed characters bearing itsy-bitsy pupils. It also makes all of them look crazy. Crazy-loco, not crazy-awesome.

Fun note- love the complacent if not contently smiling faces of the titans themselves. It's as if they look at humans as merely food and harbor no hatred. Gotta love being farmed by meat-eaters, although humanity is less like cattle in this story and more like ants hurrying to save their hive. I have to admit, I want to know if the titans are intelligent beings. Eren noticed the colossus titan take out a specific artillery unit, so perhaps they are intelligent?! The ending is pretty damn awesome..yup. I gotta read the next one.
Posted by The Frog Queen at 9:28 AM