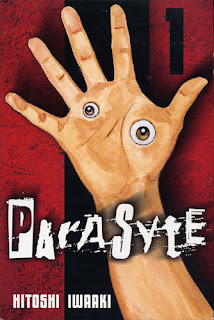 I have wanted to read Parasyte for the last year, since I stumbled across some of the artwork on line last December and questioned my friend TomorrowBoy about it. Parasyte was ran from 1990 to 1995 and TomorrowBoy recently made mention of how long the impressions of the artwork have stuck with him- since he read them in the 90's. That's a pretty significant impression to have burned in your memory. I have to agree. I went straight from volume 1 and on to volume 2.

Parasyte is currently printed by Del Rey and although it's supposedly still "in print", it's incredibly difficult to order, even online. I'm reading the series via my new Android App while trying to secure paper copies online. The series centers around the quiet invasion of parasitic worms that are basically body snatchers. The thing is, the parasites don't always work together with other parasites. They are truly more focused on their own survival than their own species. Our lead character  Shinichi Izumi (or sometimes appearing as Shingi Izumi) becomes the victim of a parasite who fails to take over his brain and instead inhabits his hand. It makes for some significant comedy as the parasite who is nicknamed Migi (Right Hand) by Shingi, tries to wrap his intellect around the social norms of humans. As a result many questions are raised and moral issues explored while Migi and Shingi run interference with humans and destructive parasites alike.

Already this is racing up the front lines as one of my all time favorite manga series. Check out some artwork below!  You can clearly see why I love this. One description: body-gore. 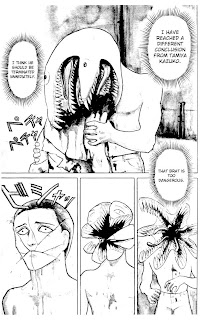