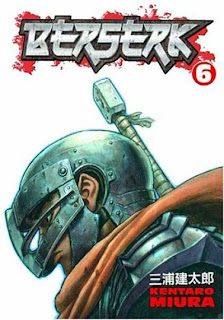 I am a Berserk fan, but also a recent convert. The world of Manga is so saturated and thickly stacked that it's easy to get lost in all the titles. Therefore I tend to go straight in for the kill on genres and topics that I am most attracted to: violent, bloody, character driven stories that disturb and terrify me; stories that give me a big stiffy. Berserk does this. I'm intrigued, disturbed, titillated (see what I did there?) by everything in this series. If only I could read it faster to catch up to current releases!

The readers are still stuck in the past with the Hawks for these volumes. Volume 6 & 7 is where we start to see some developments between Caska and Guts. We also get to see a little bit of how Griffith feels about the people around him. Griffith thinks he's better than everyone. He views himself as an island and all the people around him are simply tools to use as part of his survival. I think I use to be like that, when I was younger and stupider. At some point one realizes that it is just not a very healthy way to go through life... for yourself or others. Something tells me that this outlook isn't going to change for Griffith. As leader of the Hawks, he is all about building towards his ultimate goal, which isn't quite clear. It must be awfully huge. Of course, we do know from the first four volumes that Griffith ends up as a member of the God Hand although, I don't really know what all that means just yet. The God Hand reminds me of the Cenobites in Hellraiser. I have yet to understand their purpose. I won't look it up. I must let the story tell me. Not the internet. At any rate, they look evil.

I can't stop reading... I'm into volume 8 but I have so many reviews to write for Blue Raven Comics. Additionally, I got so many sweet deals on books this week. I also have to go grab volume 2 of Attack on Titan. I know Eren isn't dead. I know it.
Posted by The Frog Queen at 4:58 AM