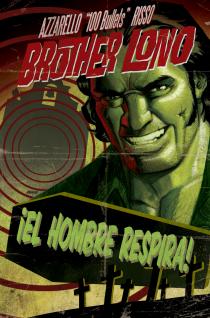 100 Bullets is an Eisner Award winning comic series that unfortunately didn't hold too much interest for me but that was simply because I wasn't a big fan of some other works Brian Azzarello wrote. Apparently I have to check it out because this story Brother Lono is pretty interesting.

I take issue with the artwork in this book however. It's your standard crime syndicate mob-type story taking place in Mexico. The tag line in the credits "Translated from Mexican" is kinda cute. Yet the artwork? sigh. It's pretty standard, pretty run of the mill... pretty boring. Eduardo Risso just isn't my cup of tea unfortunately and I have to admit that some of the frames in this issue make him look a little amateur. I hate saying it but I feel as though I have to because even though I have personally never published any artwork, I can do a better job at perspective than this guy. It feels a little rushed. The frame with the baby on the 7th page is just letting me down. His attempt to hide the fact that he cannot draw the child's kicking form by covering it with a blanket was just weak and thus made the baby look disproportionate. I guess babies are difficult to draw... but man... this just looks bad.

I still would like to read the more of the story regardless of my distaste for the artist. It is just a personal preference. Anyone who reads The Frog Queen regularly knows what kind of art I appreciate and this is pretty much the opposite. That being said, I can get over the artwork if I appreciate the story, if grabs me by my non-existent balls! That's a feat!

As far as first issues go, this one caught my attention story-wise. I love a good crime story. Let's see where this goes.