Sin City: A Dame to Kill for by Frank Miller 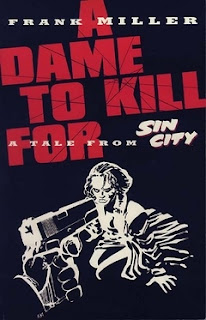 A lot of different issues came up today while I was reading Sin City and flipping through some posts on a Facebook forum for collecting comics. Since I have joined the forum, I've basically seen nothing but copious pics of celebs and models dressed as comic book heroes and plenty of "cat calls", "likes" and "hoots". It got me thinking about what I consider objectification of women and what is not. You know what, I don't feel like sexy women are automatically objectified or bring such objectification on themselves by dressing sexy. I do feel there are comic book artists/writers and fans that objectify women.

Things that make me feel that Sin City does not objectify women: the fact that each story contains women who are both good and bad; there are females who are heroes with personality & character. Male and females alike are depicted as strong and sexy. Sex appeal is high throughout the books, but this is part of the Sin City environment. Only the strong and sexy really survive and sex is what is for sale within the city. In addition, the females are independent and confident. They are meek little sex machines waiting for someone to rescue them, even when some of the male characters think they are. All the characters are multi-dimensional.

Would you survive in the Sin City world? Most people probably would not and basically because your average person isn't physically capable of shooting a gun or hell... outrunning a crazed killer. You need to be in peek physical condition to survive the cities criminals and the cops. Most people in reality, can't run two blocks to grab a city bus on time. Of course, if you are one step ahead of the game like most of the ladies in Sin City, you can get by.
Posted by The Frog Queen at 10:14 AM

Email ThisBlogThis!Share to TwitterShare to FacebookShare to Pinterest
Labels: A Dame to Kill For, DARKHORSE COMICS, Frank Miller, Sin City