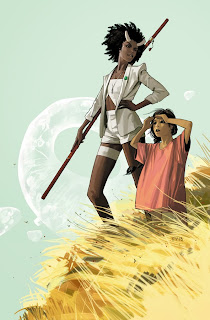 So as if I wasn't thrilled enough by the giant tree spaceship, bone bugs made me smile during a particularly rough afternoon. Most of the comic book world has been enamored with the world of Saga. The Eisner Award winning series has readers suspending disbelief all over the globe. It's no wonder that I am just as thrilled every time I read an issue, as everyone else. The fantasy is so highly outrageous that I want to hug it. However considering I've ruined enough of my singles by kissing them on the cover (oh you sexy cover) over the years (I'm looking at you Spike), I'll try my best not to hug them tightly and ruin the paper.

In issue 14, Gwendolyn, Slave Girl (Sophia) and The Will await a rescue team with Liar Cat. The Will starts having dreams about his long dead lover The Stalk in which she persuades him to give up the life of a mercenary and settle down. Slave Girl, who now goes by the name of Sophia has a sweet little self asserting talk with Liar Cat which was particularly heart warming to me. She calmly states that she is dirty on the inside because of what she has done and Liar Cat lets her know she's being dishonest to herself and she gives her a big fat hug.

Saga is as usual, one of those series that has you barely holding your bladder in anticipation and I am constantly bopping from one foot to another waiting for the next release.