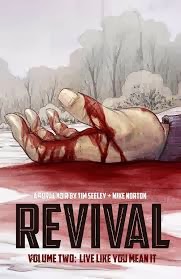 Initially, I was unsure where Revival was heading as a series. I knew it had gained enough popularity to continue with a second year of releases yet I did not know what to expect from the future of the story. I really liked the premise. It was full of mystery (and continues to hold a great deal) allowing the reader to develop all kinds of ideas about what caused Revival Day, the day the dead came back to life.

Revival is not a zombie apocalypse story. It's a story about people being unable to pass-over. It's also a story about some folks coming back to life and trying to continue on with their normal routine. It just so happens that everything does not exactly continue normally and that some of the people who come back to life, well... they might be having some issues dealing with their second coming.

What caused Revival Day? There is still a bit of mystery around that. I was going with the aliens theory while characters in the story jumped to religious conclusions. It appears that religious conclusions are running toward the um... the conclusion. I have faith (no pun intended) that this story is less about demons and more about aliens. I think it's because I wanted Stephen King's Dreamcatcher to be less awful. With all the snow and the blood (and the crazy, let's not forget the crazy), I kept being reminded of that awful, awful story that actually had some potential. If only King had left out that stupid childhood bonding BS. Yet Revival seems to be heavily about demons thus far. I am anxiously awaiting further explanation! Really loving this series! Religious nuts make for good conflict.