Attack on Titan Volume 2 by Hajime Isayama *some spoilers* 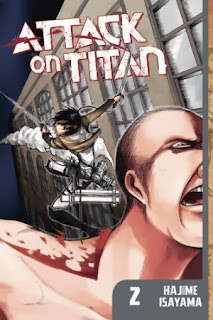 We all knew Eren wasn't dead so I don't feel I'm spoiling anything by stating this right here and now. Killing off main characters is more a Song of Ice and Fire thing or a Walking Dead thing.I can't say I agree with the quote on the back of the book from i09 stating that Attack on Titan is "Japan's equivalent of The Walking Dead". I don't see anything that really gives me that impression, the script for one, lacks the deep character development that the Walking Dead books have in spades. However, this is only the second volume so maybe it's all going to blow me away in the next few volumes.

At this point, the titans are all over-run the outer city and have HQ surrounded. The military crew made up of teenagers varying in age are running out of fuel for their maneuver equipment (depicted in the cover image) and you guessed it, all the fuel is in HQ. Mikasa has received news that Eren is dead and starts behaving erratically. It's this volume where we learn Mikasa's back story and her connection to Eren. If you weren't totally convinced by the illustration, the author makes it known that Mikasa is apparently of Asian decent. Her entire family was killed by three men intending to sell the last living Asian women into the sex trade industry. Poor Mikasa really. She is saved by Eren who somehow defeats two adults as his 10 year old self (I'm guessing he's about 10).

Something strange has happened which allows all the surviving warriors to narrowly escape death. There is a rogue titan gone berserk killing other titans. Oh wait and he for some odd reason has Eren's trademark disheveled hair..... right. In the end we see Eren emerge from the spine around the neck of the titan, utterly exhausted. I guess humans can control titans by crawling into their spines! Sometimes I wonder why I still read so much manga.  That's the end! There is no more. The series is over. Alright, alright I kid. That is where volume 2 ends and yeah, it's not so awful that I won't continue reading volume 3. I do like the creepy imagery of these huge lumbering humanoid giants. They have these elongated mouths that smile while they devour you. It's appropriately creepazoid. Sort of body gore-esq. I can dig it. I dunno how much longer I can suspend my disbelief unless there is a really good explanation for the whole spinal-tapping thing (see what I did there?).
Posted by The Frog Queen at 8:38 AM