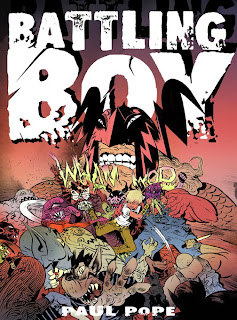 Wednesday, October 9th 2013 I ran out and grabbed the hardcover edition of Paul Pope's newest graphic novel Battling Boy. Then I hugged it, and hugged it.. and it hurt my arms because it's hard....

I have been anticipating this release since my friend TomorrowBoy did a video interview with Paul Pope at a Library Symposium in Chicago (the bastard). All that aside, I opened the book up as soon my day ended! Oo so much fun!

Clearly, Pope has taken some inspiration from Norse mythology (or Marvel's Thor, however you wanna look at it). In no way does he name this lightening god as Thor. It is clear where he's come up with this story.

The whole plot begins with a monster over-run city called Acropolis which is suspiciously Earth-like despite the monsters. This inter-dimensional Thunder master send his only son down to Acropolis to help the humans wipe out the monsters. Battling Boy attracts some attention to himself in a fight with a giant monster and gets his own PR crew. The mayor of Acropolis and the military are really big on public appearances.They want to make Battling Boy the new hero of the city, in place of one they recently lost. However, Aurora West daughter of the late hero, is not thrilled by Battling Boy's sudden fame. 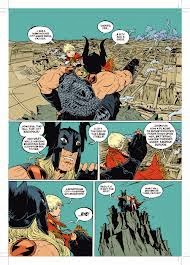 The artwork is unmistakably Pope yet somewhat different. I feel as though the panels are somewhat minimalist in comparison to say 100% or Heavy Liquid. With the exception of busy Monster hide-out scenes, Pope takes advantage of sprawling skylines. I feel as though this is the kind of project Pope has wanted to do for a while so that he can have the opportunity to create the strangest monsters any of us has dreamed of. I get these flashbacks to 1980's children's cartoons every time I look at the creatures in this book. 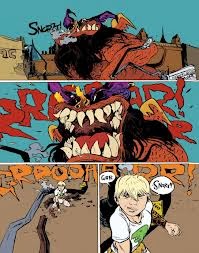 Battling Boy is an all-ages adventure to be released in two parts. Volume one can presently be purchased in trade paper or hard cover editions in a smaller than average format. It is approximately the size of a thick Archie comic which I quite like although it now looks better on the shelf with my Manga than my other collected volumes.