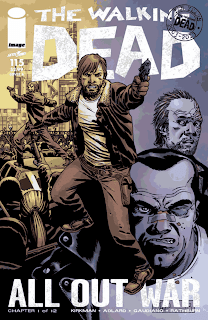 FINALLY! The war we have all been waiting for is about to go down! This is just the beginning and there is no way of telling which of your favorite characters are going to die. Prediction: Michone's new love interest, Ezekiel.. yeah that's right we all know Michone is not going to get to be happy. Who should they really kill off?? ANDREA! I have rarely been a fan of Andrea from the beginning. I am guessing she is most likely safe because she's staying on the Hilltop with Carl who for some reason has been put in charge of organizing the Hilltop. Carl is looking more like a teenager and less like the child we've known him to be.

So what is Rick's plan? He takes all the people who are willing to tag along, up to the gates and calls to Negan with a message for surrender. It's more of a plea to the peaceful inhabitants of Negans compound. Surrender Negan & his forces and you will all live on peacefully with the Hilltop & The Kingdom. However, Negan's reaction is to kill off all the defenseless people inside his own walls. We all knew Negan was ruthless.

Most of this comic is about our heroes parting ways and preparing for the worst although they are all so optimistic. I have a feeling that Rick's plan has not been completely revealed to the reader. How are they going to get out this one?
Posted by The Frog Queen at 5:12 PM