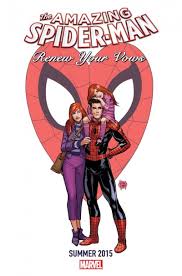 First, let me get a few things out of the way : let me remind you that I'm not super passionate about Spiderman as I am now an adult. Since I'm no longer ten, Spiderman doesn't really appeal to me and I've read Amazing Spiderman and other incarnations over the years just for fun. Also, One More Day didn't ruin my life. It barely impacted me at all. I had to go back and read it fairly recently after a discussion with my friend Nev's because I couldn't remember it. Then I said, oh yes I remember this now. What I had completely forgotten also, was how OTHER people were so impacted by the story and had not forgiven Joe Quesada.  Yet I personally don't think that writers/creators decisions are a slight against readers but you can't tell that to die hard comic book fans. You just can't.

So I guess a lot of people were expecting Dan Slott to just carry on the story as if One More Day never happened. I read a few different reviews to this extent. Why are we as fans so entitled to think that creators should just give us any crummy story we want just because we're fans and we think we deserve to see it? There's been a lot of that lately in the community. This weird sense of entitlement because you spent 3.99 on a Marvel comic (that by the way is on the cheapest f'n paper.. I kinda HATE buying Marvel comics but I've complained about this before).

On top of this, people are upset that Spidey got all killy. OMG Spiderman killed someone? It's an alternate universe... what's saying that Spidey couldn't kill someone? I kinda feel like once our Superheroes have babies, they're suppose to go all kill-la-kill. He's protecting his spawn. That's conceivably to me, why THIS Spidey killed, in fact I think protecting his little drool machine is the only way one could write Spidey actually killing Venom. Of course, we don't have any proof he's even dead. Sure a burning building fell on him, but come on... it's a comic book.

Bottom line, I think Slott is amazing writer and after every one of his issues I am happy because I escaped my mundane reality and became absorbed in a different world. That comic made me forget my lame existence which means I was super entertained. That's fucking success as a writer right there. And screw you, I liked how Silk was introduced.
Posted by The Frog Queen at 4:18 AM