I Feel Sick: A Book About A Girl by Jhonen Vasquez 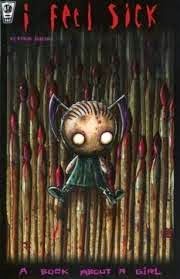 Slave Labor Graphics are kind enough to do a reprinting of I Feel Sick. I haven't read this in at least ten years. I had to look up the original release date because I couldn't remember. It was originally released in 1999, I feel very old today.... I had read the trade paper which I had borrow from a friend not long after that.

For those of you who may be unfamiliar, Jhonen Vasquez is the mastermind behind Johnny the Homicidal Maniac. Animation lovers may know him better as the creator of Invader Zim. Excuse me while I go sing the Doom Song. Alright, I'm done. So if you're in Canada like me, then you just paid (or are about to) a whopping $5.95 for this reprinted issue. If it makes you feel better, the cover is printed on glossy 80 pound cover paper. The inside is nice and glossy as well. So it's not like you're paying six bucks for a piece of mass produced crap from Marvel that's liable to disintegrate in the next five minutes. It's even complete with a Filler Bunny story at the end! I have actually had Filler Bunny tattooed to me for about 12 years lol. Also, it may interest you to know that yesterday marked the release of The Collected Work of Filler Bunny in paper back! (I got mine already).

The story is spin-off about Devi who you'll remember from the Johnny stories. She's the cynical gothic sort who's social life is lacking. She's an artist haunted by a painting she was attempting to complete. A self portrait you see. Remind you of anything Oscar Wilde-esq? Like everything that comes from Vasquez it's funny. It's also heavily critical of the goth scene which may apply less to today's youth but it certainly spoke to me as 1999, I was in grade 11. God, that really doesn't seem that long ago. Here I am still sitting in my room reading comics. Although this time, it's not a room in my parents basement. It's the second floor of a condo so you know, I guess things eventually get better. Don't tell Devi that though, she's busy talking to that creepy doll painting. You'll see.
Posted by The Frog Queen at 11:28 AM

Email ThisBlogThis!Share to TwitterShare to FacebookShare to Pinterest
Labels: I Feel Sick: A Book about A Girl, Jhonen Vasquez, Rosearik Rikki Simons