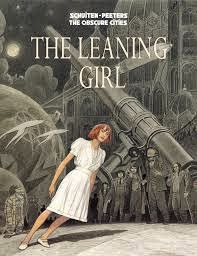 I thought I would talk about something a little bit different today. Last week I received this amazing book from Alaxis Press owner Stephen D. Smith. I had my eye on the book for quite some time including all the books in The Obscure Cities (Les Cities Obscures) series. (Just a side note, for those of you who may not know, Alaxis Press is an imprint of Atomic Vision Entertainment, Inc.)

Released in March 2014 for the first time in English, acclaimed graphic album series The Obscure Cities: The Leaning Girl. This book features the most prominent character of The Obscure Cities series, Mary Von Rathen and her bizarre affliction on being, well at a slight incline. No matter what experiments they try, what cruelty her headmistresses inflict, Mary is stuck leaning slightly and incapable of standing up straight.

I rarely include video in my posts but I decided it was a good addition this time, the music added is pretty fitting I think.

The Leaning Girl follows Mary on an existential journey to find love and belonging. Her travels take her to the stars and further! The artwork is timeless yet with the opening scenes, taking place on the mysterious Star Express roller coaster, I kept being reminded of Fritz Lang's Metropolis, which of course I'm extremely fond of.

Les Cities Obscures was originally published in the early 80's by François Schuiten and writer Benoît Peeters. Since it's originally publication it has been translated from it's original language French into ten other languages winning the Gaiman Award as no 1 foreign comic book series published in Japan in 2013. This first English edition of the book itself is beautiful, measuring 9.25" x 11.625" and .75" thick. The paper, I'm told was specially picked out by both the publisher and creators specifications. It's a thick art paper your not likely to see in your average graphic novel.

I really loved this story and the publisher has promised to see to it that all Les Cities Obscures makes it to English publication. The Theory of the Grain of Sand is next in line for press.
Posted by The Frog Queen at 4:46 AM