Return of the Living Deadpool 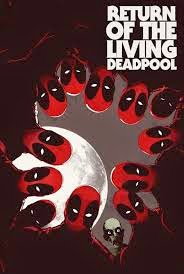 Cullen Bun, no stranger to the Deadpool title has returned to bring back another round of Night of the Living Deadpool. In this story a gal named Liv wanders what's left of civilization, avoid zombies and something worse- The Deadpools. You see if a zombie were to chomp on the "hero" Deadpool, he would turn into a version of Deadpool. We are told that is much worse than regular zombies. Liv encounters a Deadpool who has no memory of what has happened and also doesn't seem to want to murder her for fun so the end up roaming together. The script is fraught with good annoying Deadpool commentary. I say annoying because Liv just looks like she regrets making friends.

I really love Nicole Virella's work here. It's really beautiful. She's done the entire piece in black and white, except for of course Deadpool who's red is lights up the panels much like something from Sin City. You really get that horror movie feel while reading it and that's the point.
Virella's use of close ups in this panel being among my favorite in the book. Look how spooky those other Deadpools look! Those are so seriously bad-ass. 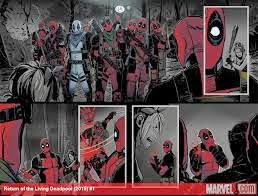 This is a limited series so you best run out and snatch it up fast! Nicole Virella is a newcomer to Marvel but no stranger to comics and I expect we will see much more of her work in titles from the big two this year! My prediction! :D
Posted by The Frog Queen at 4:52 AM