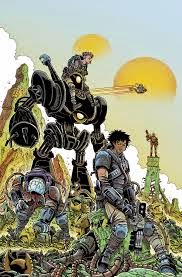 This futuristic story has the slight flavor of Bitch Planet without being influenced by the competition of Running Man. In this reality, prisoners serving a life sentence have a chance of seeing the light of freedom again by serving in the war efforts for 15 years on the front lines. But at what cost? Is survival even possible? Samara Simmons is about the find out. In this future, war takes place one different planets, defending colonies from the onslaught of aliens!

Cluster is written by Ed Brisson who comes from the successful Son of Anarchy run and Prophet, a personal favorite. Damian Couceiro contributes his talent to this story. You'll recognize him from many Planet of the Apes comics!

Although I dislike when there are many comics focused on the same subjects, Cluster is coming from a different angle than futuristic prison story Bitch Planet. There's a trend with comics when one subject is successful, other copies tend to follow but I don't feel as though this is a copycat story. Look who they got doing the cover? It's James Stokoe, another personal favorite and you can only imagine that Brisson and Stokoe met when they each had their hands busy in Prophet. Boom has been especially great lately. They are celebrating their first decade in publishing and really pumping out fantastic titles. Check this one. I think you'll be pleased!
Posted by The Frog Queen at 4:25 AM