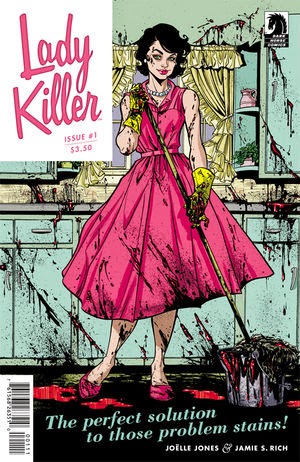 I consider myself lucky often because these amazing people continue to talk to me about their work. Today is another one of those days where I feel nothing but gratitude. The lovely Joëlle Jones spoke with me about Lady Killer, one of the hottest new series of 2015! Issue one has recently been released by Darkhorse and I've been blown away the artwork. You can read my review HERE. Enough about me, let's see what Joëlle  is saying.


TFQ: How did this story get off the ground? How much of the initial story did you contribute?

Joëlle : Well I have always had an interest in vintage ads and illustrations and I really wanted to explore it more and the story came out of that. I had never written anything before and I was nervous about my ability to tell a story that way, so I brought in Jamie who I have collaborated with many times in the past to help me through the process.


TFQ: The artwork is breath taking! I have to say, I haven't seen action panels like this that really got my blood moving in a long time! How did you begin to block these panels?

Joëlle: I rough out the fight scenes on paper before I even write them, causing me to have to cut a lot of the fight scenes in the writing stage. I try to put in a lot of thought into the choreography because I think the best fights have a real physical feel to them and I like fights to have strong opposing emotions behind them.

TFQ: What did you use for references to some of these scenes?

Joëlle: I love films and devouring as much as I can, I still collect and obsess over old illustrators and I try to read comics as much as I can. For the fight scenes I'll make my boyfriend fight them out with me and I use photo reference from those, I try not to use them faithfully (especially when it's two women fighting) but I think it provides a good place to start. The domestic scenes are a lot of research into home decor and fashion but I really enjoy that part!

TFQ: How should we view Josie Schuller? Immediately, I wanted to sympathize with her as soon as we see how protective she is of her family. I take it that her family isn't a front for her line of work as a hired assassin?


Joëlle: I don't want to give too much away about her beginnings but her family is not a front. I think she really cares about them but the duality of her lifestyle I think brings a lot of tension. I really like Josie but I'm not asking anyone to. She murders people. Part of the fun of the story I think will be in figuring out if you do like her or not.

TFQ: Why do we want to sympathize with killers in these types of stories? 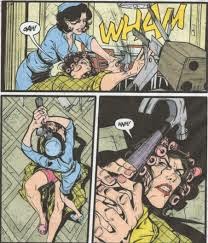 Joëlle: I have no clue. As far as I know everybody has had that moment when they look at someone and they say to themselves I could just loose it right now and kill them, or crash my car or whatever. People have dark thoughts but there is something in place that keeps us from acting on them. People must like a good killer story because of the what if question we all have.

TFQ: How did you come to work with Laura Allred on this?

Joëlle: I worked with her on a madman short story and her color choices just blew me away and I've wanted to work with her again ever since. I feel really lucky to get the chance!
Posted by The Frog Queen at 5:23 AM