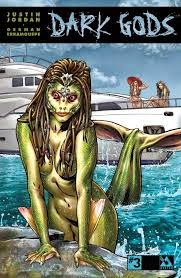 Justin Jordan is a busy writer. I'm especially fond of his monster laced work. I dunno if I ever actually stated the reason I really like Dark Gods. I love conspiracy theories. Oh don't get me wrong, I don't believe like- any of them. I actually don't think the human race is intelligent enough to pull of a successful conspiracy like the ones floating around online. We're just too stupid and we don't get along. I suspect there would be constant betrayals in all secret societies which would cause them to implode. Maybe the one way it might work is if there's one dude just using everyone. Like the guy behind this time-tripping chaos house in this last issue of Dark Gods. Maybe, this could work. The only conspiracy that I kinda wish were real that I think would explain some shit, are the Reptoid conspiracies. Now that shit, I would get behind is it just wasn't so completely ridiculous.

Have I mentioned that I love murder houses? Not real ones,but ones in books. This one reminds me a bit of that episode in Buffy where they all go to a Halloween party where a fear demon was accidentally unleashed. Time and space have no meaning and everyone is confronting terrible fears. I have a theory that I relate anything to an episode of Buffy. Anyway, I really like this chaos house. Of course telling yourself it's not real, in THIS house isn't going to work and the crew ultimately has to devise a much more interesting plan of shorting-out the lightning imbued home.

Dark Gods is a lot of fun. Monster pretty much float my boat. I was a scoobie fan as a child because I love all the different monsters. So in comics, I'm right there too. Although this cover bears no relevance to the actual story, I guess German has a thing for scaly demon chicks... and most of the comic book world probably does too...
Posted by The Frog Queen at 5:17 AM