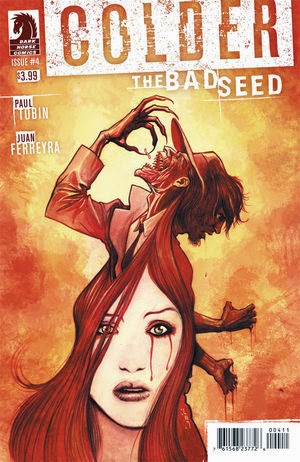 OH MY GOD! You know I thought the first two issue had amazing creatures and horrific slaying of fingers... but no. This issue wins. WAY better creatures and superior finger amputation! I love me some creatures. Demons rock my world... well my comic world. Obviously I don't believe in demons... (or at least you can't make me admit that). Many of my all time favorite comics are based around demons and the world that hides behind our own. In the first two issues of Bad Seed, Declan must enter the world of demons and no it's not called Hell here, it's the hungry world. The demons in this world look awesome! It almost fits appropriately in the bodygore category.

Horror in comics is pretty everywhere right now. Darkhorse has always done horror best for me. They always license the best manga, and their books are so damn deluxe. I'm ashamed to admit that I didn't read the first Colder story arc. A mistake I wish to correct asap.

Paul Tobin, also known for Bandette, is an Eisner Award winner and it really shows because he's crafted such a consuming tale. It'll get your phalanges waving! I am really hoping that this Colder series continues. I want more after this arc. I'll petition for it ! Or maybe just complain loudly if another series isn't produced in the new year. For now, we're in luck, Issue five will be in stores February 25th. However you can grab THIS issue on Wednesday!

When you think of amazing horror, what is that pops into your mind? Comics only. Don't start talking about movies to me :P
Posted by The Frog Queen at 1:29 PM