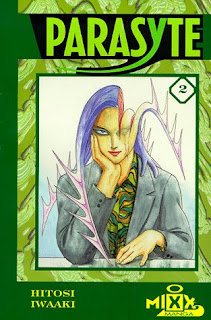 "Parasyte" is an inaccurate translation of the original Japanese title "Kiseiju" meaning "Parasitic Beasts". Now that I have read the second volume, I see just why I am bothered by the English translation of the title. It has become apparent that Shinji does not see only the parasites as monsters but much of humanity as well. I think the proper title as Parasitic Beasts fits much better.

It's in volume 2 Shinji becomes more attached to Migi, the parasite living in his right hand. BY attached, I don't mean in the loving emotional way. I mean, Migi has attached himself to Shinji much more deeply. Shinji is unfortunately fatally wounded by a parasite that has taken over his mother's body. It was up to Migi to repair Shinji's heart and so he bonded with it. This made the connection between the two all the much more complicated and permanent. I believe Shinji is beginning to lose his humanity but on the bright side, he's gained some pretty awesome powers. Super speed and the ability to leap over tall objects. Humanity, or superpowers? Superpowers or humanity? hmmm if I had to chose, fuck humanity. I want superpowers! Shinji didn't get the choice however. He got stuck with Migi's split second decision to save his own hide! If the host dies, so does the parasite and Migi won't let that happen. I wonder if part of Shinji's humanity has been passed onto Migi??

There's all sorts of ways parasites can invade the human body. If they don't take over the brain, they get to be talking, thinking appendages just like Migi and there is a startling and funny twist at the end of volume 2. I'll leave it for you to read. Can't wait to open volume 3.
Posted by The Frog Queen at 9:37 AM