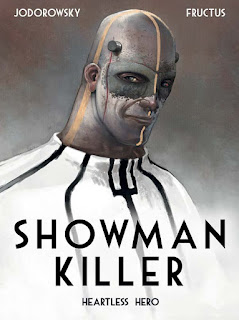 Titan is doing the English speaking world a great honor in bringing us Alejandro Jodorwosky's praised graphic novel series Showman Killer. The hardcover drops on December 29th but originally came out in 2010 in Spanish.

I'm pretty in love with the art in this series. The cover image alone provokes so much emotion with the showman killer himself and his oddly shaped head which hardly seems human at all. The book is illustrated by Nicholas Fructus who's carreer previous to this was mostly video games but he was appointed Art Director for Arxel Tribe Studio which meant he got to work with Moebius and Druillet. Now that's pretty amazing.

The story starts with the birth of the Showman Killer and provides a detailed story of his existence up until he claims his independence. I won't spoil any of the details except to say that it is of course reminiscent of The Metabarons. The story takes place in the same universe as The Incal, Technopope, and other Jodorowsky sci fi books. I don't think he's ever written a science fiction story that took place outside of this universe.. hmm let's think... nope can't think of one.

The book is just over 50 pages and is contains the first story arc. We can expect to see the next volume from Titan but it is not yet announced when. Truth be told, I'm still waiting on the second volumes of Jodorowsky's First Blood, also released by Titan. In total, there should be just three volumes to release which begs the question "why is Titan not releasing these stories in one complete volume?" I suspect it's got more to do with money and less to do with actually pleasing the English speaking audience. We have no choice but to wait in anticipation. I can say however, that I am in love with the Showman Killer. It left me with an awful cliffhanger... I need the rest.
Posted by The Frog Queen at 4:20 AM