Exclusive Interview with the Creators of Limbo! 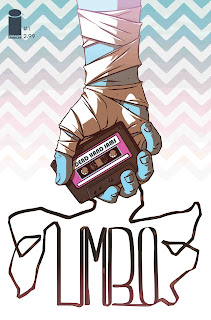 Today I have the absolute pleasure of sharing with you an interview with the creators of a new Image Comics mini series! Dan Watters and Caspar Wijngaard have come together to bring us comic book obsessives a series entangled in a world of Mexican imagery and voodoo. In six issues the story trips our heroes through the depths of a city where technology and the divine collide. To make things extra special of course, the whole thing is fraught with mystery. I was lucky enough to ask both creators a few questions and now I'm sharing them with you. Limbo hits the stands this Wednesday, November 11th! Make sure you grab your copy then!

TFQ: Could you tell me what inspired both the story and the art?

DAN: Caspar and I both draw from a wide range of influences, but the more obvious ones in Limbo are probably 80s b-movies, the works of David Lynch and Raymond Chandler, early Vertigo comics… pretty much everything, really! The nature of the book we’re making kind of lets us throw a lot of things into the mix without them feeling (hopefully) too fragmented. 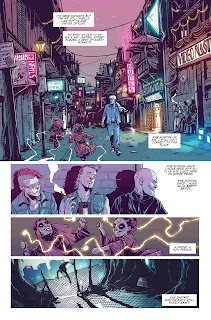 CASPAR: It was important for me to choose a narrative I enjoyed drawing, I never wanted this project to become boring as a creator and as a reader. So we chose genres and scenarios that we both loved and made sure to keep the book as engaging as possible. This comic will most definitely not contain page after page of static talking heads sat conversing in a room, we made sure each page felt unique whilst keeping the flow in check.

TFQ: The use of both Mexican imagery and religious practices fill this story with a very different cultural experience for me as a Canadian. I can really only appreciate this culture from afar. It feels very mysterious. Can you tell me a little about the Mexican themes of this story and how/why you incorporated them?

DAN: There’s certain imagery and mythology prevalent in Limbo that it’s hard to talk about without spoiling the book, but I can say there are elements of Voodoo and different cultural folk mythologies that we’ve drawn on because they take us to these really Jungian archetypal places. Death features heavily in the book and perhaps more specifically, ego death- but of course, not every culture takes a negative view towards these concepts, and that’s part of what we wanted to explore.

CASPAR: I've always been fascinated by Mexican art, it’s so vibrant and alive, even when conveying a subject such as death. I had often incorporated its themes into my previous work, but had never explored it within comics.

TFQ: With the themes in LIMBO heavily based around death, it was a no-brainer for me.
There's this mysterious connection between gods, magic and technology. Can you tell me a little bit about this, without giving away the plot I hope!

DAN: Technology is used by different magic users and entities in Limbo- to them these machines are just new ways of utilizing old traditions. Entertainment technology, be it music players, radio, television, right the way back to the book, have always been ways of altering our consciousness, which inevitably ties into a shamanistic current. William Burroughs did some really bizarre and fascinating experiments with tape recorders that definitely had something of an influence in our approach; especially his work with tape and cut-up. I’m not sure if that makes much sense right now, but hopefully it will when the book’s out!

TFQ: I'm often intrigued about how color pallets are chosen for books. Can you tell me a little bit about how you chose the colors for this issue? 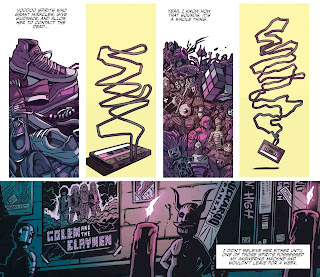 CASPAR: Ha ha, thats a tricky question. There are some colours used in this book that are tied to the narrative and there are also elements that are used to convoy its 80’s/noir settings.

But, mostly it’s down to how I feel the page will work and what will keep the visuals interesting.