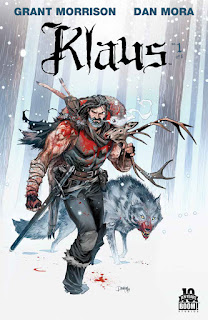 I know I said I wasn't going to read this... but curiosity got the better of me. What on Earth is going on in Grant Morrison's head? I can't figure out who this series is written for. Okay, first of all this is on Boom Studios label. It's not on their child friendly imprint KaBoom! so that leads me to believe its intended for an older audience. There is a bit of gore as Klaus is beaten and run through with an arrow which also lets us know this isn't for children.

My biggest issue is, why would I, or anyone for that matter, want to read about Santa Claus being this crazed, burley hunter man? and why do I want to read about how he went from wildman hunter to the toy magic man. Do we get to see him settle into retirement and suddenly go from the ripped strong man to suddenly obese and gray? Let me be honest, I was never really a fan of the whole Santa story anyway. The concept of some old man making toys, breaking into your house and leaving them behind for your kids tended to give me the willies. What's his motivation anyway? I've always been far to cynical to accept such a story.

Considering this plot is nearly heretical to the belief system of secular americans, and just flat out absurd to me personally, it's actually not a bad issue. It actually was kind of entertaining in a really bizarre "where the hell is this going" sort of way. The scene near the end with the psychedelic toy magic was probably the most confused mess of panels I've seen in a while. I won't explain it because I run the risk of spoiling the plot even though I don't actually know where it's going so it would be difficult to spoil. You know, in the interest of comic book review integrity, I won't go into further detail.

The artwork is really lovely so I applaud Dan Mora on his expertise. I'm not really familiar with his work. I can't recall anything he's done previously but something makes me think he had some work with DC. At any rate, he has turned this strange series into a lovely art piece despite it's misguided psychedelic scene.

If Morrison does actually show this wildman Klaus turning into a cherry nosed obese man, I think I'd be greatly appreciative but this is turning into a  medieval action comic. Anyway, here's your sneak peek! You can get your copy of Klaus #1 this Wednesday, November 4th. 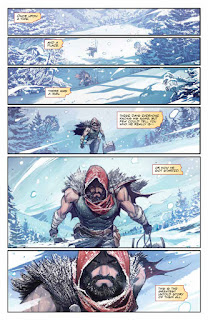 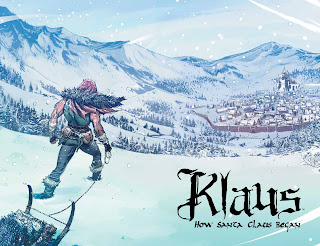 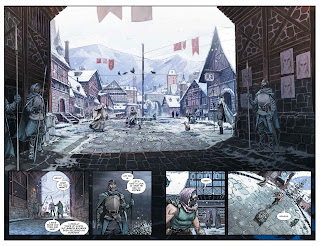