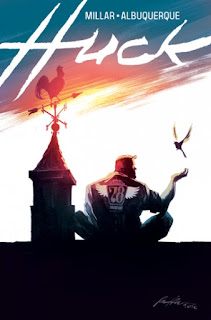 Most people know that I have tended to really enjoy Mark Millar's books which have spawned from his brain the last few years. It's really about time we saw him working with Rafael Albuquerque. You remember Rafael right? If you are unfamiliar with some of the series which made him famous (American Vampire) then you remember the scandal of the Bat Girl cover a few months back in which Barbara's rapist The Joker is painting a joker smile on her face as she looks at the reader in terror. The impact of that cover shook the comic book community and disgusted many as Batgirl had become a cherished and lighter series which many teenagers enjoyed, perhaps without the history lesson of the victimization of Batgirl at the hands of The Joker.

Huck is an awfully large departure from that piece. It's a far cry from American Vampire and maybe just what Albuquerque needed to do as the first issue of Huck is lighthearted and tame. The story focus' is on Huck, a selfless, orphan Hero who has the strength and special powers to save people halfway around the world. The script has a lot of the charm that many Millar World comics possess but lacks gratuitous violence some of us have come to love. It also lacks a strong political message and gritty smart mouthed character making Huck one of the most squeaky clean stories I've ever seen come from Millar World. In affect, this is also causing me to wonder if this may also therefore be completely boring. Only time will tell.

I can say that the book is beautifully illustrated and what it lacks in controversial subject matter, it makes up in artistry. I'll read on because I'm curious to see where this one goes. The next issue lands December 16th!
Posted by The Frog Queen at 4:12 AM