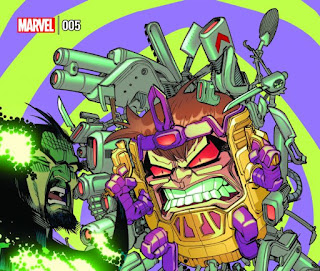 I am really pleased to give bring you an interview to perk you up on yet another Monday. I got the opportunity to ask Christopher Yost a few questions about what he's currently working on. His current Marvel mini series  MODOK Assassin #5 hits stands Wednesday, September 30th. I was really itching to ask him what we can expect next from him. Yost was one of the genius writers who contributed to the success of Mavel's film feature Thor: The Dark World. He has once again been brought on board for the third installment Thor: Ragnarok. Rather than me prattling on in my usual way, let me just bring you the interview:

TFQ: You're current mini series for Marvel MODOK Assassin is just wrapping up but how do you really feel about it AND MODOK?


YOST: I’ve been a fan of MODOK for years — he featured in an animated series I did called “Avengers: Earth’s Mightiest Heroes”. He was fun then, and he’s even more fun/insane here. It’s been a blast to work on, and I actually just wrapped up the last issue. I’ll miss that misshapen, grotesque madman.

TFQ: Can you tell me about how the story came to be?

YOST: Editor and friend Daniel Ketchum and I have worked on several mini-series together, and he had a vision of MODOK that was essentially Ryan Gosling in “Drive.” You know, if Ryan Gosling has a massive head. Daniel called me up, asked if I was interested and had time, and I was indeed interested. This is the kind of think you make time for.

TFQ: Your career has taken you all over the world of comics and television. You've written stories about the most beloved super heroes which others people can only dream of having the opportunity to write. What characters are you dying to get your hands on that you haven't had in your grasp already?

YOST: Because of all the animated series, I’ve actually written a big chunk of the Marvel Universe. I’ve never written Superman or Wonder Woman, which I’d be interested in doing.

TFQ: It's been public knowledge for a while that you're co-writer for the Thor: Ragnarok film. With CGI capabilities now, film doesn't hold the limits it use to and writers have more freedom to let their imaginations fly. Are there still a lot of challenges in writing for the big screen in comparison to writing comics?

YOST: There are different limitations outside of CGI, more practical real world aspects. Whatever you write, someone has to figure out a way to film it. And even with CG, you still need characters that people can understand and relate to. No matter the cool super powers, the big explosions, the spectacle of it all… people need to CARE. Thor is awesome, but it’s not because he has a hammer.

TFQ: In 2009 you released a three part mini series called Killer of Demons with Scott Wegener. Do you have any creator owned publications in the works?

YOST: I’m hoping to do a new comic book starting in the fall, actually. And there might even be some Killer of Demon news coming up.

TFQ: Can you tell me what comic book releases we can expect to see from you after MODOK is all wrapped up?

YOST: MODOK is my last comic for the foreseeable future! I’m hip deep in THOR: RAGNAROK and MASTERS OF THE UNIVERSE right now, but hopefully I can get another book going sometime soon.
Posted by The Frog Queen at 4:32 AM