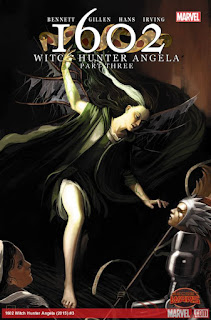 Up until now I didn't have any opinion on Witch Hunter Angela. I initially picked up the first issue because my lovely friend Marguerite Sauvage had contributed pages. They were a beautiful addition to the issue and I'm disappointed that she didn't contribute to subsequent issues. I was however delighted by this third book who had a selection of pages illustrated by Frazer Irving who's work had grown on me since the release earlier this year of Grant Morrison's Annihilator. I must say that Irving's ideal genre might be period based fantasy because this is simple amazing. I've had a particular affinity for his expressive and gaunt faces. Whether its science fiction of fantasy, everything he does has this gothic aura. I love it.

As for the story, the second issue had many giggle moments within the script. Serah being probably the most humorous of the two witch hunters and Angela basically driving the humor with her lack of... It wasn't until this third issue that I found myself really enjoying the series. With Irving's contributions and the role of 1602 Anna Maria aka X-men Rogue being added, I found myself forgetting that I was trying to critique the issue and simply began to enjoy the story.

Reading on to Irving's contributions unfold as Angela tells Anna Maria the story of Romeo and Juliette but not quite the story how we remember it. The roles of lovers are played by Cloak and Dagger. I have a particular love of the characters because it was one of the first comics I read. I remember a four issue mini series about the characters that was put out at some point in the 80s. It was my favorite story a read it many times as a child.

I didn't have a firm love of the writing in the first two books. I seem to like the whole issue until the physical conflict ensues at the end of each issue. But I must commend Bennett because she has managed to make an imaginative and entertaining series from something I felt iffy about from the beginning. There's only one more issue left in the mini series and I'm interested to see where it leaves off.
Posted by The Frog Queen at 3:31 AM