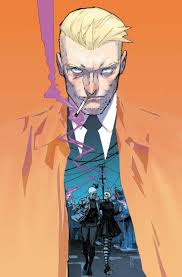 I don't have to remind you that I'm the biggest John Constantine fan, but I will... and there ya go. So anyway it appears the Riley Rossmo has dropped off from illustrating the guts of this series for now. He has produced another brilliant cover however.

Although I wish Riley was doing all the artwork inside for consistency and because he's awesome, I do approve of the choices made here for substitutes. I found this issue held strong the edginess I want for Constantine books, holding that little bit of indie looseness that this book really need. You can't have John Constantine looking like well... like he did in the New 52 series. The covers alone made me angry. These really bold lines, so calculated and thoroughly planned before execution. that doesn't sound like Constantine at all. No this book has always required the appearance of effortless charm. That's Constantine - effortless (for the most part) and with this series, so far, I think they nailed it on the art.

So of course it's not going to surprise you when I tell you the art for this issue was done by none other than Vanesa Del Ray. I've been enjoying her contributions to the comic book world for a while. Last year she illustrated the spooky mini The Empty Man written by Cullen Bunn. I think that was the book that first got me into her artwork.

I think you'll find this story to be interesting although I fear that it's heading in the direction of yet another shitty love story. Frankly, Constantine's womanizing isn't a new story. I mean, we all know it's easy to tell that story and it's been done A LOT in past Constantine books. There's nothing new about John's past chasing him. Sometimes I miss the old John. Not older John stories, I mean the stories that were written when he was married and in his 60s. You know Milligan's last run of Hellblazer. I liked that John.

I suppose no one REALLY likes reboots but new readers who had no established past with a character. As far as reboots go however, this still remains one of the best and certainly has been refreshing to read after the mess that was the New 52. Yes I'm still bitter.