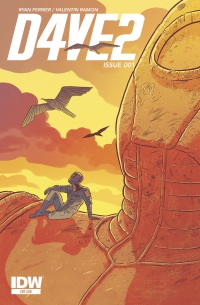 It's always thrilling when you realize a mini series you fell in love with gets another chance to define itself. I am a huge fan of D4VE. The script had me in stitches laughing and I couldn't be more pleased that IDW has signed the creators Ryan Ferrier and Valentin Ramon on for a sequel. D4VE2 combines all the comedic fun of the original story and tosses that same thought provoking reality in your face. You know, as much reality as you can get from a fictional Earth ruled by robots. My personal favorite pieces of the first issue aren't the outright humorous bits, but actually the ones with the more serious tone. D4VE2 is out tomorrow so make sure you grab a copy and get that on your sub list!

Being such a big fan of the original story I decided I had to reach out to writer Ryan Ferrier for the inside scoop on D4VE2. Here's our Q&A:

TFQ: I can't tell you how thrilled I am that D4VE continues on! Can you tell me a little about how you chose the next set of crazy events for D4VE, without giving it all away if that is possible lol.

Ryan: Thank you so much! We're all really thrilled too—D4VE has been one of the most fulfilling and fun projects to work on, something that's incredibly dear to our hearts, so getting the chance to continue is an absolute dream. The first series (shout outs to Monkeybrain for making it all possible!) was such a personal story for us, that while we didn't expect to keep going, when IDW brought up the possibility of continuing, we knew that D4VE2 had to be just as, if not more personal. When you put your heart and soul into something, it can be intimidating to follow up, especially since D4VE had so much catharsis attached to it. But, just as life goes on, the inspirations, themes, and messages engrained in D4VE2 are inherent again. Much like ourselves, the journey isn't over until it's over and someone's patting the dirt on our graves—D4VE2 is the same for the characters involved; life has gone on, and now there are a new set of crises to deal with. 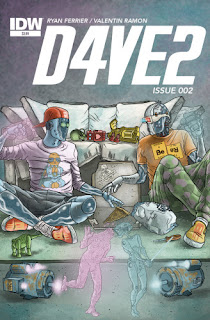 Where D4VE was a global threat as much as it was personal, D4VE2 is a lot more existential for both D4VE and his son, 5COTTY. This is very much their book, and it deals a lot with defining yourself, and becoming cognizant of what that actually means. For D4VE himself, the first series was about realizing his true character; now he must atone for this. D4VE2 presents this in a very, very unexpected way, and I think readers are going to be shocked with exactly where we're taking this new arc. As for 5COTTY, his crisis is entirely internal—he's getting older and life is hitting him, as it should, and he's finding his place in the world, and discovering who he is. Where the first series was a deconstruction of romance, a post-romance as it were, a large part of D4VE2 revolves around connecting with other people, falling in love, and abandoning expectations, both from family and others. There is, of course, a copious amount of action and thrills, though—it wouldn't be D4VE without it. We're really doing our best to hinge that on these really real characters. As always, we've upped the adult humor and naughty words too. Bless IDW for letting us run with it.

As for the elevator pitch on the plot, without giving too much away, it takes place one year after the events of the first series. We jump right in to D4VE, seemingly happy in his new role as general of the reformed army, with 5COTTY one of his cadets. But a strange black hole opens up and spews out a very weird, very non-alien artifact, and from there, everything goes to hell in a way that affects not just D4VE's life, but all of existence. We're positively giddy about where it goes—to a big, bad, crazy place. 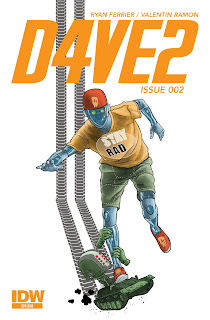 TFQ: D4VE's son is the beacon of a large portion of the comedy but in this chapter we get to see a little past his hip, apathetic exterior. Can you tell me a little bit about why the charger got a tad serious? (Even if it was for just a couple panels)

Ryan: If anything, 5COTTY is the wild card in D4VE2, and has the widest character arc. We met him very young and inexperienced, and we're now following him through an incredibly formative period in his life. He's realizing who he is, or rather, exploring and discovering that. And it's not easy, just as it isn't for anyone. He's finding things (and people) he loves, causes he cares about—unlike his father, he's been raised in a relatively peaceful existence, and connects with that in a way unlike D4VE had. Basically, 5COTTY is starting to grow up and take command of himself, and part of that struggle is his relationship with his father. 5COTTY is 5COTTY though, and by nature he is this wild, free spirit with no filter—imagine that but with a little more experience and fear of authority. I like to think of 5COTTY as being the most pure heart of all the characters, even if a little uncouth at times. He is the star of D4VE2, and not unlike Robin to Batman, 5COTTY gives his father purpose and meaning.


TFQ: D4VE has had some amazing cover art. Can you give us a little info on what we shall see in this run? Any special variants us fans can look forward to grabbing?

Ryan: Thanks! The cover art for the series is complete now, and we couldn't be happier with everything. Just like the first series, each issue will have two covers with all art by co-creator and interior artist Valentin Ramon; one "character" variant, and our regular covers which look absolutely amazing. For D4VE2 #1 we have a jaw-dropping variant cover by Logan Faerber, which is totally stunning, as well as a variant by artist Brian Level and colorist Marissa Louise, which is absolutely one of my favorites yet. We will probably have some pin-ups included as the series goes on, by some of the most talented up-and-coming artists right now. We're really excited about everything, and IDW has been so great about supporting every aspect of the series. 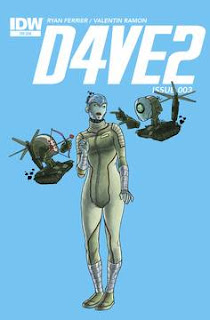 TFQ: Can you tell me a little about your process for D4VE 2?

Ryan: It's actually a really smooth process in execution—though Valentin works incredibly hard, of course—the real kicker is in the outline. Where do we take this? What kind of story are we telling? What is it about, and who are these characters now? Once we landed on that, which included an unreasonable amount of self-reflection, we ironed out the kinks and assembled the pieces. Valentin and I work so well together in that he makes everything come to life with such great detail and atmosphere. We're both really on the same page mentally, so from there I dive right into the scripting while he is completely free with the art. Rarely, if ever, is there any sort of change needed between my scripts and his art. One difference with D4VE, compared to some of my other projects, is that I often re-write here and there during lettering. I find Valentin's art informs, for example, dialogue, and having that almost-finished body to tweak the humor is a huge part of sending an issue off. It's a luxury, I know, but it makes the process that more involved and fulfilling. I can't say enough good about Valentin's genius.