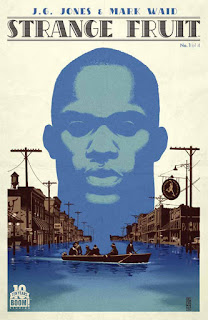 This one seems mighty timely. With June 26th's ruling in the good 'ol US of A that has made same-sex marriage legal nation-wide, there's been a lot of hate on the confederate flag and with good reason. Unknown to many perhaps is that the actual history of the flag which was created and rejected as the national flag in 1861. The confederate flag was a recognized symbol of southern America and what else do we remember about southern America (besides sweet tea)?? Slavery.

Strange Fruit's focus however is on the Mississippi river in 1927 (not gay marriage) where many slaves are free but that doesn't mean things are peachy keen. Not by a long shot. The klan shows up to start lynching at the cusp of flood when something strange falls out of the sky. What or who, is it?

I'm a big fan of post American Civil War stories. America changed so much yet when I look at the timeline, how long it took for America to become "united", it really puts things into perspective. There's a lot of hate on America from Canadians. You ask anyone and they'll say "America is racist" but there's so much racism in our back yards too. Whenever I read stories about slavery, I get to thinking about how our nation (Canada) was founded. It wasn't really any better although so many consider it so. I mean, the soil we call Canada was stolen from many tribes of Aboriginal peoples now known as the First Nations. Anyway I'm suppose to be talking about a comic book. This is what happens when you read historical fiction.

So obviously this story isn't going to be 100% realistic, I mean some dude just fell from the sky. At least I think that's what happened? It's not totally clear to me.  What I can say is that the artwork is beautiful and THAT is realistic. It's like something you would see in a vintage add selling cigarettes or maybe Coca Cola. The script is bang on and keeps you turning the pages which is, in my opinion, what a script is suppose to. So many comics rely on the artwork these days. It's nice to see the dialogue stand on its own feet here.

All in all, I give it a solid four stars. I dunno where it's going but I'm going to find out.