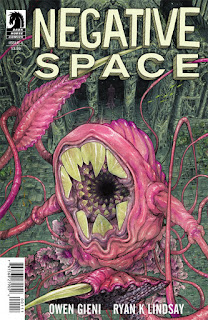 I am very pleased to bring you this Q&A with Ryan K Lindsay on his new series for Dark Horse called Negative Space. What immediately attracted me to the series was the cover. OBVIOUSLY! Then I took notice of the names on the cover and was like WOAH! I like both these guys! I'm reading this now.

I was really impressed with the character design of this book. Not only is the book visually unique but so are the characters. I am highly anticipating issue 2 and issue 1 isn't even out yet!

Issue 1 debut's this Wednesday, July 8th so you best be adding it to your pull list.

So without further delay, here's the Q&A:

TFQ: This story almost reminded me of a much more sinister version of the Truman Show. Can you give me the synopsis in your own words?

Ryan K Lindsay: Guy Harris is a writer who sits down to pen his suicide note and gets writer's block. The poor bastard. He goes for a walk to clear his head and stumbles across a generations-long conspiracy involving the mining of emotional feelings and messed up emotion eating monsters from beneath the waves. Across 4 issues, this miniseries examines the reality of depression, the scary nature of mega-corporations and what they are truly capable of, and we do it all through a weird Cronenberg adapting Philip K Dick lens of warped reality and personal invasion.

RKL: I came up with the very first page, Guy at his desk, broken, empty, his suicide note wordless before him. I then started building a story around him by wondering why he wanted to commit suicide, why he couldn't, and the kicker was to imagine who might benefit from his note and how pissed they would be that he was stalling. From there, with discussion with Owen Gieni [series artist] and Daniel Chabon [series editor] we cooked up something we are all really proud of.

And I should also mention, just getting to write about men's mental health was something I found important to me as I see it go silent far too often. It's an insidious killer - I've known too many of victims - and to shine a little spotlight has been a writing experience full of growth for me. 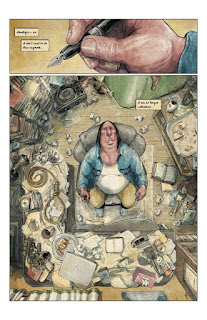 TFQ: I'm a big fan of Manifest Destiny so I was really excited to see you joined forces with Owen for this one. Can you tell me how you got together to collaborate?

RKL: I've known Owen for years and we'd been hoping to line something up for just as long. Before I took this story to Dark Horse, Owen and I collaborated on a 2 page short and when I showed it to Chabon we knew we'd found our copilot. Now I can't imagine the story, and the characters, and the world, having been crated and gorgeously illustrated by anyone else.

TFQ: On the cover there's a very creepy plant monster, will we be seeing a lot of different monsters in this story from Owen?

RKL: Absolutely. One of the earliest things we did was work out the way these creatures work, and their biological system, as well as societal structure. We worked out more than we need but it means when they appear in panel they have purpose and their own logic.

There's some really cool stuff in issue #2 that Owen does with designs and such and the more I saw, the more I scripted some very cool and insanely crazy stuff moving forward.

TFQ: How do you feel about working with Dark Horse for this release? Is this your first series with the label?

RKL: This is my first series with Dark Horse and I'm obviously honored to be now among their ranks, but I also found the experience a real level up. Working closely with Chabon on the story was aces because he's a sharp mind and he brought some great twists into proceedings. I have also found Dark Horse immeasurably supportive of me and of this book so I'm very grateful for that. I'm a nobody so they have really put their support behind me and it's been such a gonzo trip.
Posted by The Frog Queen at 3:27 AM