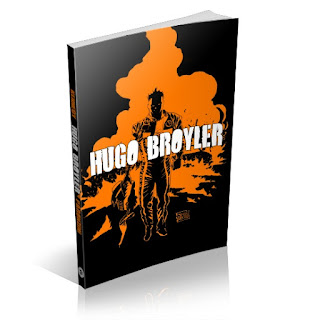 Hiya folks. I wanted to mention a Kickstarter that deserves some attention and funding. You know I don't get behind a whole lot of kickstarters, one because I'm poor and two because a lot of them just don't offer your anything for your investment which can typically be very large. Comics however are a worthy investment. Hugo Broyler 104 page graphic novel featuring the talent of various comics book artists including Bengal, Rafael Albuquerque, Djet, Matteo De Longis, Eduardo Risso, German Peralta, Fransisco Ruis Velasco and many more! The story is written by Mike Kennedy who describes the story as a fast-paced, future-noir.

If you're looking to invest in your next comic book kickstarter, as I know this is actually a thing for people, this is one Kickstarter with pledge packages from $1 to $500! Currently, they have met $3, 031 of their $7,500 goal! Of all the kickstarters I see and am asked to publicize, this is actually a really reasonable goal! Some other comic book projects are looking at upwards of ten thousand!

Check out all the details on the Kickstarter page itself RIGHT HERE!!
Posted by The Frog Queen at 4:10 AM