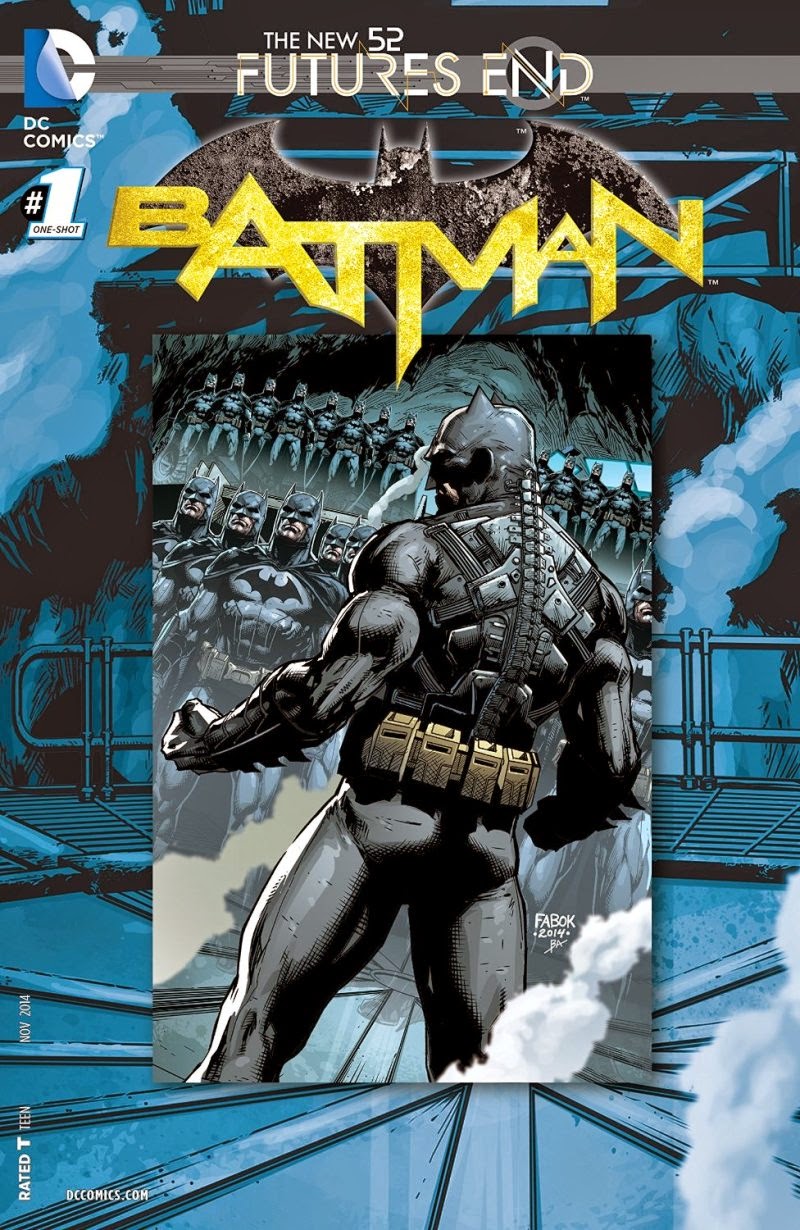 WARNING EARLY ON, I SPOIL THE ENDING IN THIS ARTICLE.

I wanted this to be awesome. I flipped through the issue in the store and thought, this artwork is pretty great. This could actually be okay. Then I got home and started reading it.

This story is set five years in the future. Apparently five years was enough to make Batman a pile of rotting flesh and bone. Wasn't he virtually fine in present day Batman? They're implying he's falling apart from battle or is he diseased?? It's really unclear.  I can't claim to know that much about the New 52 because I haven't read ALL of it. I read pieces and wasn't impressed so I moved on. That's what one does, but every now and then I try to grab a new Batman story. Sometimes I'm happy and sometimes... well sometimes you get this.

The largest problem with futuristic Batman stories that are not set in the very distant future, is that I compare it all to Pope's Year 100. Of  course Future's End is suppose to take place five years from the present New 52 plot and Year 100 takes place during Batman's 100th year alive where most of Gotham believed his to be some myth or boogieman of the streets. Yet Future's End has so much bullshit technological jargon in it, you'd think it took place in space. Fawkes and Snyder kinda got lazy with this script me thinks. It's too bad because artist Aco is brilliant here. I feel like they really let him down. You might have noticed Aco lately in the Constantine series which is also written by Fawkes. It's something I pretend just doesn't exist. I am still bitter about DC's decision to end Hellblazer and start this Constantine abomination.

Besides being over-all too much plot to shove into a one-shot, the ending just made me angry. Cloning is the #1 lamest way to push a story forward in the face of a dying character. The only time I ever really liked it was Alien Resurrection and I MUST be the only person on the planet that enjoyed that movie. Even Wheddon practically throws his hands up in the air and backs away from it claiming it merely a learning experience in his writing career. I realize this whole cloning issue isn't new to the DC universe, I just really dislike it. I can do that for serial right? Just like people who don't like the phrase "for serial" can choose to throw my opinions right out the window. FOR SERIAL.

So my end to the Future's End rant? I feel let down. Poor Aco. Your work deserves more than this.
Posted by The Frog Queen at 4:53 AM