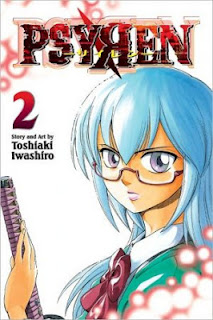 A bit more fan service in this volume. It wasn't unexpected as this is a Shonen Jump manga but sometimes I just get a little annoyed of all the suggestive posing of females in manga and comics in general. Really though, I should just get over it because it's everywhere. It is nearly impossible to get away from.

In this volume we learn a decent amount of info regarding Psyren, this mysterious plane in the future. Although Psyren is a game, it's apparently a game to stop the future from being a depressing, barren, wasteland. I do not know how playing a reality survival game full of monsters that tear you to shreds (and if you do die, you turn to ash) is supposed to help the future but I guess that's the point. To be honest I don't really care how it's supposed to prevent future Japan from collapsing- the book is entertaining enough despite the ridiculous premise.

The author also introduced a few new players. One a famous actor, one a womanizing teenager who hates pretty much everything. I'm not fussy on either of them. We'll see how they play out. I'm betting at least one of them dies, which I have little opinion on.

We also learn in this volume that Sakurako (our leading lady who performed the disappearing act in volume 1) is actually being tutored on psionic energy by a famous pianist. Yeah I know this plot sounds ridiculous. Apparently all humans have the ability to access psionic powers from the reaches of our wasted little brains. Being in the Psyren atmosphere contaminates it's players with..?? something that awakens this natural dormant ability. Of fuck why am I reading this crazy book? Well, I like games and I like monsters. That's pretty much it. Oh and I like a fictional future where the world has been destroyed. (That being said I'm actually pretty environmentally conscious in real life).

I really find Sakurako's sensei incredibly- ANNOYING! She's a famous pianist who rewards her little Psyren-drifter student with a private piano concert, you know for surviving the savage wasteland of Psyren... I'd be a little pissed. I'd be like "Hey bitch, I just faced certain death for the sixth time and you're rewarding me by playing classical music, you self absorbed...." or something along those lines with more profanity. You get the idea. So stupid little Sakurako starts clapping, while jumping up and down absurdly because she's just so pleased that she got this private piano concert! Lady, you almost internally bled to death, don't you think you deserve a little more than a piano concert?

At any rate, there really isn't any action in this volume. I'm excited to read volume 3 because our heroes, or as I now like to think of them~ "idiots", have just been transported back to Psyren... again.
Posted by The Frog Queen at 3:26 PM