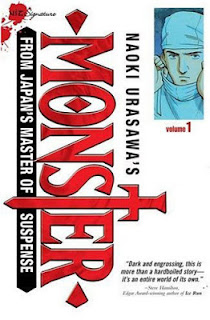 Anyone who reads this blog is painfully aware of my praise and love for Naoki Urasawa's work. Not only is he an amazing writer, that creates realistic and complex characters, he's one of my favorite manga artists.  I always find that the expression on the faces of each individual character hold exactly the right emotions that the person is supposed to be feeling. Master of suspense? How about just  master of manga.

Urasawa is responsible for the famous series Pluto which I've read and extensively wrote about. Monster is not unexceptional in any way. The remarkable and honest portrayal of humanity at it's best and worst, is written into this story just like that in Pluto.

In terms of actual art, Urasawa is probably my second favorite manga artist. The first obviously is Junji Ito. Urasawa really knows how to set the tone. I love setting panels.

One thing I thought was strange was that this story takes place in Germany and the main characters name is Tenma. Professor Tenma was the name of a character in Astro Boy and thus, Pluto. I guess itès just a little nodd to Tezuka. The main character in Pluto was German. These  little things are interesting to me.

A quick run down of the plot? Murders, doctors and personal inner-conflict. Me like-y.
Posted by The Frog Queen at 2:41 PM