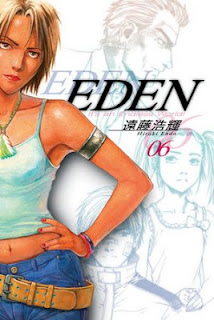 I love Eden. I like the balance of character development vs gore and violence. It's probably strange that someone who hates violence in any form, can't get enough of violent comics. I guess I've been the same since I started reading X-men as a child. Eden however is no X-men. It gets awfully bloody and disturbing. BLOODY AWFULLY DISTURBING. I love cyborgs, super mutants and various humanoids. Eden has this and everything else that makes an awesome post-apocalyptic story.

There is a lot more focus on Elijah again, who's now a servant boy in a brothel. While attempting to help a heroine addict and expose some seedy suits as gangsters, he's just doing laundry and running food around the brothel accompanied by prophylactics. It's really funny as Elijah is just a teenager and never had sex. There are lots of awkward moments where he's delivering things to the working women.
Posted by The Frog Queen at 9:32 AM