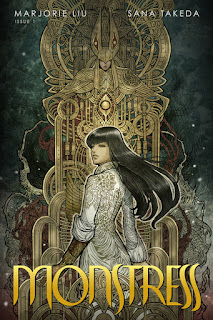 I wasn't sure what I was going to get with Montress, imagine my surprise at opening the digital file at 8pm to find it was 72 pages long! Author Marjorie Liu (Marvel's Astonishing X-Men) herself even said "I didn't know how massive it was until I started writing it".  I was intimidated at first but I finished the issue without a thought. I just kept reading... I was captured.

Typically when it's this late for me, I don't start a new series, especially when the first issue is this long. I'm pretty braindead after supper, my day starts early. I really wanted to check this out though because the art is so breathtaking. It has all this manga influence within the eyes of the younger characters. I flip back to the credits to read the author, Sana Takeda, with a name like that she's definitely Japanese. It all makes sense, no wonder I'm enthralled. When I search a bit on the web I find that she's had some work with Marvel on X-23, various Spiderman stories and covers. She's without a doubt ridiculously talented but I think Monstress is by far the prettiest of her work I noted online.

Montress didn't remind me of any story in particular. It's pretty epic and reminded me of many fantasy based manga I've been into since I was a teenager. I am a sucker for fantasy based manga and suddenly I started having flashbacks of Angel Sanctuary. It's the little demons in this story. They're not evil exactly, they're just a separate side. I love stories with complex demonic characters. Although I can't say for sure that these humanoid monster characters are "demons" but that's how the humans in the story are treating them. However, the monsters are the victims and losers in a huge war. They've become prisoners and slaves.

This was a really great first issue. I got to know the characters and got to learn a little bit about this complex fantasy world. There's still lots of questions by the end of the first issue. So I will definitely be reading the next issue. Will you?
Posted by The Frog Queen at 3:44 AM