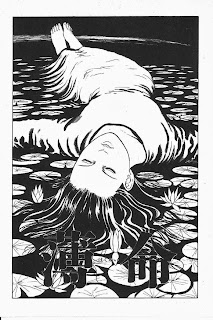 Flesh-Colored Horror is a collection of short manga stories by Junji Ito. I would like to talk about one particular story in this book called Dying Young. This story originally appeared in Monthly Magazine Halloween in 1991.

This story begins with the miraculous transformation of school girl Ayako's best friend. For no foreseeable reason, she begins to change slowly, day by day, until she takes on the appearance of a completely different person, however now beautiful. The gradual change in her appearance was apparently accompanied by a gradual change in her health, as the young girl one day falls down dead. It appears her body expired. No one understands the cause of her death. After some time, other girls in the school begin to undergo these changes causing onlookers to believe a strange new plague is over-taking the population of girls. Rumors start to circulate around the halls. If you eat the heart of another girl you won't be overtaken by death and can remain beautiful and most importantly~alive.

My interpretation of this story: It servers as a cautionary tale about the dangers of being vain. Ito warns the female reader that being yourself is more important than being beautiful and aims to nearly vilify those who gain beauty by unnatural means. I think it is also important to note that the story contains strong allegory for feminine puberty, using the changes young women undergo to terrify and scare the reader. As Ayako notices the changes in her best friend, she eventually sees the same changes in the other girls as she looks about her class. There is that sense of being left behind maturity-wise as she remains the same and her classmates grow to become more beautiful young ladies with breasts and curves.

All in all, it's pretty awesomely disturbing yet containing kind of the opposite of body gore. Different for Ito.