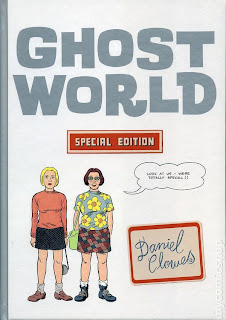 I have been waiting for this for a while. Ideally, I would have liked to purchase a copy for myself but as a student, $40.00 is just far too much considering all my other expenses. Ten dollars for a manga volume once in a while is one thing but $40.00 for one book. I'm on a budget. At any rate, the library had it and I waited for it.

Ghost World was originally serialize in Daniel Clowes' famous Eightball, issues # 11-18. It was first published by Fantagraphics Books in 1997 and turned into a film by the same name in 2001. I remember seeing it in the theater and being thrilled. I got it on DVD as soon as it was released.

There are notable differences between the movie and the comic even though the screenplay was written by Daniel Clowes (although I'm sure it was scrutinized by the production company). It's typical that there would have to be some re-working of the content to translate it properly to screen. Part of me is forever annoyed by this.


Some differences would be the sequence of events and the order in which they appear in the book, not to mention the added events in the movie. I also can’t help but feel like the actors took on a much different personality for the main characters than that of the personalities in the book. Enid for instance seems to have much more of a superiority complex than the one in the movie. She does appear to be somewhat more ambitious and self-reliant in a way, although all her superiority is just a cover for her morbid self loathing.


The two characters are my polar opposite in terms of how they view the rest of humanity. I believe that people are innately good while Enid and Rebecca can barely stand the entire lot of the human race. I’m generally accepting of everybody while they reject people for their opinions and differences. I find it repulsive that the two of them think that just because a person is one way in the past that they will always be that person, ongoing into the future. In the book, they are always running across past classmates and degrading them for who they were in grade 10, 11, etc. It’s this kind of judgmental mentality that bothers me, compounded with the fact that they don’t see an individual’s ability to change.That being said, just because I don’t particularly like the characters or agree with them, does not mean I dislike the story. I actually really do as all the characters do seem truly “alive”.
As anyone could guess, the Special Edition collects more than just the original serial. It contains the original script for the movie and lots of sketches, storyboards, a Little Enid comic, loads about Clowes creative process (look I rhymed). One little issue, I don't care much about this extra content. I don't care about the creative process of others. I have mine, and well I'm good with it. That being said, I'll listen to Sam Kieth's internal monologue any day. I gotta find his door, you know like the one John Malcovich has? I don't care about celebrities, artists, writers, I just care about their work. How it materializes just seems unimportant to me. I suppose it doesn't help that whenever I tried to learn about a particular artist or musician, I was sorely disappointed with the reality. Maybe that makes me a bit like Enid.