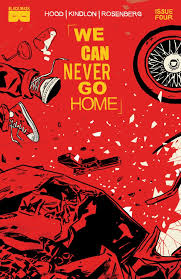 You know it's really weird how I got attached to this series and I don't even know how many issues it's suppose to be. I originally thought it was going to sit at four issues and now I'm like... maybe it's an on going? So far, it seems that I could follow these characters around for a long time. For a murderer, lead character Duncan is pretty entertaining! His irrational and split second decisions make for good action and Madison who unfortunately takes the role of the angry matronly figure rather than potential girlfriend (despite what Duncan thinks) actually kicks the most ass while she's cleaning up after Duncan's shit antics. Despite having super powers and an uncanny ability to meet trouble, the two are a crack team who have basically not accomplished anything successfully so far in the story. I'm starting to imagine them flying off some cliff in a convertible. That being said, it'll more likely be a Honda Civic or a pick up truck.

No matter what you think of the main characters, you're not going to be able to predict what happens in issue 4. I'm mystified that I can't stop reading because it's not exactly the type of book I'd stick with. I'm really not all comic book happy for the super powers type but We Can Never Go Home isn't your typical super power story. How many times have you heard that right? Seems like people are always saying that but in this case it's actually true. Mostly because super powers aren't really what this story is about. In my head, it's about two screw ups and that always make for excellent story right?

The fourth issue comes out tomorrow and if you haven't been reading, you should still be able to find the first couple issues as they went for a second printing. The series has been popular enough that Black Mask actually did a second printing with a bunch of awesome new covers. So you, go get em while you still can.
Posted by The Frog Queen at 3:51 AM