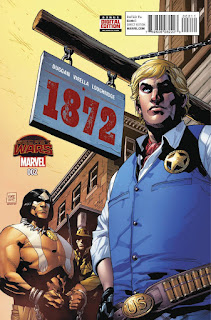 It's Friday and you know what that means, time for a new interview! I'm so excited to bring some Q&A on one of Marvel's most fun stories to come out of Battleworld. 1872 takes us, and some of our favorite mutants (not to mention a certain Mr. Stark) into the old west. I'm a sucker for westerns and since Battleworld has pretty much made it possible for writers to do whatever they like, why not a western?!?! I've talked with Nicole Virella previously about her work on the Return of the Living Deadpool mini series with Cullen Bunn. I love her bold style and especially her character design! The first issue of 1872 is available now with the second issue releasing August 19th. You should definitely have this one on your pull list.

TFQ: I just finished reading the first issue and I immediately wondered what kinds of challenges you faced drawing chargers who have been previously portrayed and remembered famously on modern scenarios. Were there any challenges translating them to 1872?

Nicole: I wouldn't say there were challenges, just creative possibilities. Gerry [Duggan] has a clear understanding of this world's cosmology, which comes through his writing. And to give credit where credit is due -- Doc Shaner, who was originally on the book, created really amazing concept drawings for some of the initial characters. So from there, I started the concept process for the rest of the cast, which for me was the most fun. I was especially excited to create and ranslate Natasha into her 19th century counterpart. She and Red Wolf also have a costume change at the beginning of issue three, which was fun designing since it looks as if they may have swapped certain items from Bucky's wardrobe to create their unique ensembles. 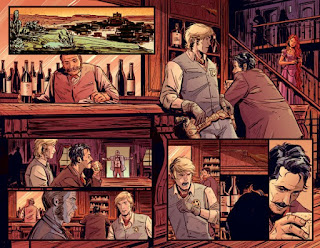 TFQ: How did you get involved with this project and how many issues did you illustrate for it?

Nicole: Jordan D. White and Heather Antos recommended me for 1872 after working with them and writer Cullen Bunn on “Return of the Living Deadpool." I'm so grateful to them for the opportunity since I'm getting to work with Gerry Duggan on this awesome series, of which I'm illustrating four issues.

TFQ: Who is your favorite character to draw in 1872?

Nicole: Hard to say, I don't really have any favorites, it's been enjoyable to draw all of them. But the ones that I liked drawing in particular were Bones (Crossbones) and Carol Danvers, just to name a few. 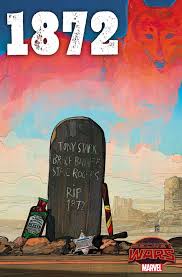 I especially enjoyed drawing Bones even though his role was short-lived. When I designed him I decided to incorporate the his crossbones or 'x' motif into his facial tattoo/paint. The idea was this -- he like the rest of Fisk's gang are holders of secrets and privy to special information. They are tight lipped and live by their own set of values. And it's especially true because Bones wears that idea boldly on his face. Contrast that with someone like Carol who is very much out in the open and fighting proudly for what she believes in. She's very charismatic and knows how to defuse a situation whether it be with her words or fists! I really adore her and I'm especially excited for people to see her in issue two and three!

TFQ: Can you tell me about the mediums you chose for this series ?

Nicole: I'm working digitally. In the last five or six years I've found that for myself it has become easier to work digitally for economic reasons. However, working digitally doesn't mean you produce work any faster, it just creates a more efficient way to keep production all together. Meaning all the layouts and pages are organized and the expenses of supplies and materials are kept to a minimum.
Posted by The Frog Queen at 3:28 AM