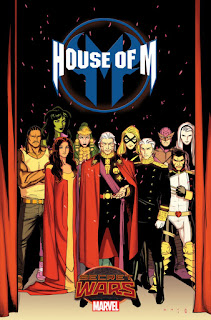 The original House of M circa 2005, was a book I really liked. In fact, I was big on the entire story leading up to it. It was kinda crazy, ridiculous and different. It had a nice explanation for rearranging the Marvel universe. At least it was one that I found entertaining. I also got to see more of my favorite mutants, Quicksilver and Magneto. It was this storyline that gave me love for Wanda too. The entire Magneto family really.  Of course it was Bendis who wrote this awesome story.

It's been ten years since the title came out and Marvel's decision to re-use the title struck me with interest. Battleworld has made it possible for writers to bring back any story they liked from Marvel history ever. That could be an awesome thing (like 1872)... or a really terrible thing...

I haven't read much from Hopeless who won the privilege of writing a new version of this story. CBR was granted an early review of the book. Both Marvel and DC lock down their early reviews and exclusives, selectively handing them out to specific review sites. I've gotten a few over the last two years. However, I'm writing this the day after release so that answers that question lol.

I gotta say, the whole thing feels a bit rushed. The concept is interesting enough (here's where the spoilers hit folks). Magneto is overseeing an Empire where mutants reign. Humans are being exterminated and our crime fighting humans like Hawkeye and the Black Cat lead a rebellion against the mutant supremacy. The biggest kicker of all?? Atlantis is in negotiations with the Empire and Quicksilver is in charge of making sure Namor complies but that's not actually what is happening at all. Behind Magneto's back, son Quicksilver plots a coup with Namor and that's where the story leaves off.

It all happens too fast which is something I've noticed about Marvel mini's as of late. The rush to tell the story leaves all character development in the dust. I just want to see a little more personality shine through. I want to see more of crazy Wanda and I want to see Pietro naked.. er I mean, display his talents. I mean... fuck it, I just want more Pietro.  (Damn you Marvel making everything child friendly).

I didn't really understand why CBR was unhappy with the artwork. I thought it was fine. It paired well with Kris Anka's cover and that's not something Marvel ever takes into consideration. I LOVE the cover of this issue. Issue 2 is also done by Anka and you can see it just over on the side there. Lovely as well but there's something about the first one, where the eyes are on the reader...has a barrier breaking power. The third cover is particularly awesome and beyond that hasn't been released. I tried to hunt around the internet to see just how many issues this will be but couldn't turn anything up. My guess would be around four but who knows.

All in all, not a great first issue but knowing me I'll have to finish reading the series and I'm stupidly down for reading anything with my favorite mutants. I give it a three of five stars with the artwork saving the day.