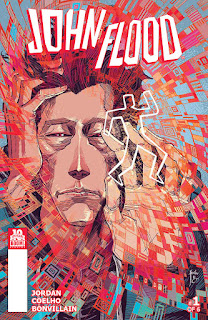 The very first thing I noticed about this issue was how much the cover reminded me of The Sandman. The long face, high cheekbones and dilated pupils. But I though, hey, it's a super nice cover and lets read on.

I wasn't sure what to expect. I've read a lot of Justin Jordan series and I'm a big fan of the current ones. I purposely did not bother to read the synopsis on PreviewsWorld. I thought I'd just dive right in.  It's a colorful book and John Flood is a colorful character. I can't rightly say what kind of character he is. Is he good? Is he bad? There's an innocents that surrounds his character, but it's the innocents of a madman. At the same time, I get the feeling he's far too intelligent to be innocent.

The interior artwork is handed to us by Jorge Coelho who is responsible for Sleepy Hallow. I think him and Justin make an interesting match!

I'm not sure where this story is going. Perhaps it's a bit of a who done it but I'm waiting for the Jordan horror to seep in. I did get the feeling this was a horror series yet after reading issue one, I'm no longer certain. CBR's exclusive on the series makes it sound like a murder mystery and really, who doesn't like a good murder mystery.

It wasn't at all what I expected but I enjoyed this opening issue. Might as well solve the mystery! After all, any guy who doesn't need to sleep is worth reading about.
Posted by The Frog Queen at 3:25 AM