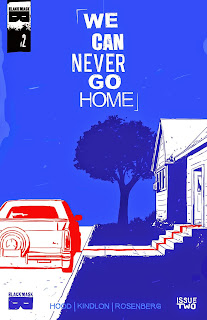 Another exciting release week coming up. Newcomer label Black Mask co-run by horror giant Steve Niles releases issue 2 of We Can Never Go Home. The first issue sold out and went back for a second printing. I really enjoyed the first issue, you can read that back here. The story follows two teens, one burdened with super strength, the other has the ability to kill...anyone.  That second one will make you laugh. You'll have to read it though, I'm not going to spoil it. At the end of issue one, they decided to run away from home.

Comparing this story to other "super-strength" teen comics, I'd have to say that I love the lack predictability written in here. One, it's not for kids, language-wise, content wise, where most books about people with super abilities run in the vein of superhero comics, this one does not. Although you won't find it as bloody as something like say Kick-Ass, it's by no means unmarred by violence. I like myself some ultra-violence in my comics (that's pretty much the only place I like it).  On top of this rather unconventional adventure, I really enjoyed the character interaction. Duncan is a little unhinged and Madison seems to feed off of this. The fact she agreed to leave town at all rather than going to the cops has me thinking that she's just as much off her rocker as he is. All in all, I'm very much looking forward to seeing where this story goes. Only three issues left! You can grab issue two this Wednesday at a comic shop near you. Better yet, call and order.
Posted by The Frog Queen at 3:55 AM