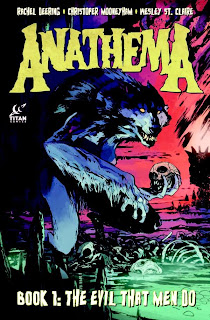 Titan has to be publishing faster than anyone can keep up with. I know I've been having trouble. They're line-up of European books to North American for this year alone has me excited but I can't seem to get to everything I want to read in. I simply have too much too read. Not a something I consider a bad thing. However, this little gem caught my eye when as soon as I received the press release. Anathema is a werewolf story full of mysticism and some vintage looking horror. The book is released this Wednesday, May 13th. I'm delighted to explain a bit to you.

I've read a lot of stories about werewolves. They are generally pretty run of the mill. Some guy becomes a werewolf, he either kills his gf or watches her be torn apart by whomever is to infect him. Anathema is unique in that is diverts from any werewolf story I know, traditional and modern. Although it takes place in what appears to be medieval time, it doesn't follow typical werewolf lore and therefore was a new and exciting read for me. I mean, I actually enjoyed and became really sad at the end because I dunno this ending. Sorry folks, gotta remind yourself that this is volume 1!!! I'm already clamoring for volume 2.

The story follows Mercy Barlow who's homosexual relationship has led to the death of her lover... by burning.. a mysterious cult which Mercy has vowed to destroy. They've taken her lovers soul with the intention of using it to resurrect an ancient and terrifying evil. Too much for one woman, Mercy receives the power to become a werewolf and defeat her foes. Well, that's the short summary, the plot is actually more cultivated and detailed of course. An all around well crafted story. I especially like that Mercy is not turned into a vampire by means of the regular well known werewolf story, by being bitten. This fact in itself, at the beginning made me very interested in continuing the read. Writer Rachel Deering is someone I will keeping my eye on in the future! But for now, I will be eagerly awaiting Volume 2.