The Wicked + The Divine by Kieron Gillen & Jamie McKelvie 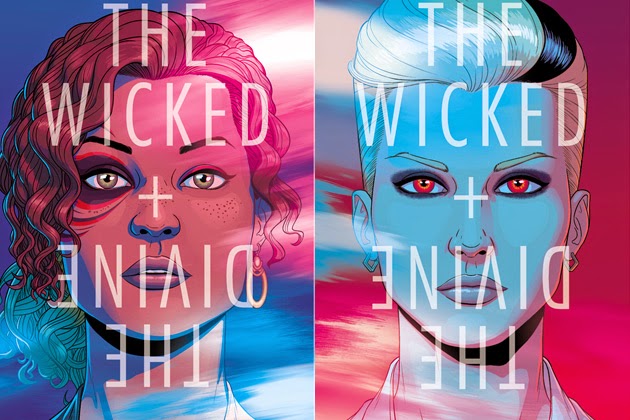 So I bought the variant cover because it was drawn by Bryan Lee O'Malley (as seen below). So this is a new story from the creators of Phonogram which I covered a while back in this article. I wasn't the biggest fan but I wanted to give this new story a shot because I was hoping that just maybe, there would be some decent female characters in it. Also, McKelvie's work is just visually stunning. It's cleaner than I typically like but I got sucked into it. I find it quite the improvement from Phonogram.

I can't say with any certainty that I understand where this plot is going. Like Phonogram, we've got rock stars who believe they've ascended to divine status. Unlike Phonogram, maybe they actually have. I have never liked the thought of musicians being seen as anything other than creative human beings. I have always had a problem with celebrity and a disgust of idolization. I can appreciate creative work and envy their talent but I don't understand the state of celebrity. I've met my share of rockstars in my 20s and I didn't really get what all the hub bub was about. They're just people. That being said, I like this commentary on the vanity of pop stars and how their fans treat them - like gods. My sincere hope, is that this story comes off less hostile towards women.

SPECIAL RUMOR GOSSIP: I heard there was going to be an upcoming signing at Strange Adventures here in Halifax. I overheard the owner mentioning he was saving the O'Malley variant covers specifically for sale for the signing. I actually almost didn't get a copy because he wasn't going to put ANY out on the shelf. He didn't state WHO was going to be there for the signing. I'm crossing my fingers that it's Bryan Lee O'Malley.