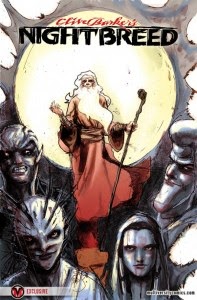 I was a big fan of Clive Barker when I was younger. I'm still partial to organic special effects like those used in the original 1990 production of Nightbreed. The make-up work still sticks out in my head. Although Nightbreed didn't achieve great response from critics during release, it has become a cult favorite among the horror-fantasy addicts like myself. You have to love that legend David Cronenberg actually has a role in the film.

To be perfectly honesty, I generally dislike graphic novel adaptations of television, movies and novels. There are very few which I have personally enjoyed. In fact the only one I can say I was thrilled with was the adaptation of The Last Unicorn which was released about 3 years back through IDW. I decided that given the time that has pass since the publication of the novella Cabal which the movie Nightbreed was based on, a graphic novel had potential to retell the story and do it better.

As it stands, the actual imagery of the story was an ambitious project for any film maker. Although I enjoyed the special effects make-up, most people found it cheesy and therefore could not suspend their disbelief long enough to enjoy the movie. I was pleased to see that Kowalski let the characters remain similar in appearance to those in the movie while allowing his artistic voice to shine.

It's worth noting that this is not the first Nightbreed comic book. In 1990 Epic Comics released a 4 part mini-series to go along with the release of the movie. It had some popularity which caused it to run for 25 issues but was eventually cancelled. Check out these covers though! http://www.comicvine.com/clive-barkers-night-breed/4050-23595/ There also exists a Hellraiser/Nightbreed crossover. This journalist was unable to find a copy of that however.

The first issue of Nightbreed focuses on the origins of the characters who reside in Midian. If you are ignorant to the world of Nightbreed, Midian is a strange subterranean haven where monsters can live peacefully. It's gruesome but beautiful. Canadian artist Rossmo's cover art is stunning. You may remember me talking about him with John Lees last week about his cover art for issue 1 of And Then Emily Was Gone, one of Rossmo's recent contributions. The illustrations within the comic are equally as charged.  Kowalski who's work can be found in the series Sex, Marvels Knights: Hulk and Malignant Man.

If you don't know anything about Nightbreed, never watched the movie or read the novella you will not be lost when reading this issue. It exists on it own as a new and separate entity from the previous publications. I'm very happy that Andreyko and Kowalski were able to breath new life into this unique story. Looking forward to more!
Posted by The Frog Queen at 11:38 AM