That's Because You're A Robot by David Quantick & Shaky Kane 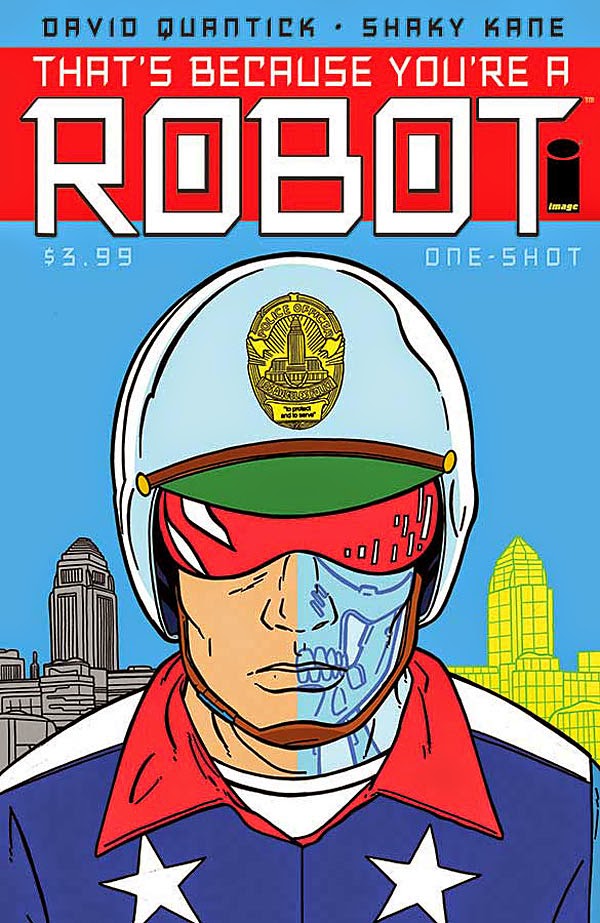 This is a one-shot deal that was release yesterday through Image Comics. I saw the cover, saw Shaky's name and said "DONE". The great Shaky Kane gives us that pop-art-tastic brilliance he's always been known for. David Qauntick gives us a story about two cops who just found out that one of them is a robot. Problem is, they don't know which one. The script kills me (in the good funny way not the bang I'm dead way). It's not very often that I giggle over comics lately. Guess I'm reading too much fantasy which tends to lack the type of humor that appeals to me personally. I'm all about puns, and terrible jokes. Repetition is one of my favorite kinds of comedy. As each cop repeats to each other "That's because you're a robot" using various different words, they argue over who is human. All the while they let the bad guys get away and cause horrible harm to investigations and the city. They are the worst fucking cops.

I love Kane's artwork. It makes me happy with it's bright blue's and yellows. Oh my god and you have to see the cop uniforms. Well you can see the top of it in the cover but man. I mean, come on!! That's hysterical. I really would read pick up every issue if this turned into a series. However, I doubt that is about to happen sadly.
Posted by The Frog Queen at 4:03 AM

Email ThisBlogThis!Share to TwitterShare to FacebookShare to Pinterest
Labels: David Quantick, Shaky Kane, That's Because You're A Robot