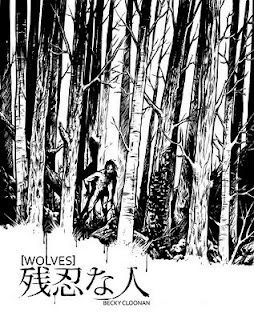 My good friend Jesse Hanlon passed this to me when he came back from a stint of living in Montreal. Cloonan, is an American comic book artist who produced a series of one-off stories in a smaller than traditional format. They are beautifully produced. A lot of love has gone into these and they have been re-printed several times due to demand and sales. I of course have a great respect for females in the comic book industry and a tremendous amount of respect for Cloonan. She was the first female artist to write for DC's main Batman title (issue #12).

Wolves was one of her self published works from 2011. It is a haunting story narrated in reflection to past events and embittered with the after taste of regret. The dark and sometime provocative images are especially appealing to me personally. It is not a long tale but it is a complete tale with a poignant ending that will be remembered. If you see this in any shop, pick it up without a second thought.
Posted by The Frog Queen at 7:30 AM