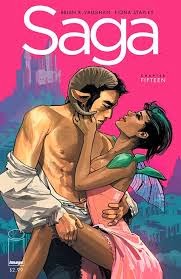 Delay, delay! Usually my favorite comics are delayed in release but no, this time it's me having issues (get it?) getting my work done! I read this the day it came out but was steadily drowning in software manuals and thesis papers. Let me start this little blurb by saying that I absolutely love the cyclops novelist! I love his character even though cyclops of past comic books made me wanna yack (Scott Summers)! However I really like this alcoholic novelist.

The Will is of course, my favorite character. He's rough and tumble but still possesses a soft spot. The end of the issue is really fantastic. We knew something strange was going on because Will was seeing his spidery, dead ex-girlfriend everywhere. She was telling him to abandon bounty hunting and settle down on this random planet he crashed on. Turns out that was the result of a parasite that likes to convince foreign organisms to settle into the ecosystem. Guess they can't properly reproduce or something, I dunno! Maybe they just like diversity, you know it's like aggressive immigration!! ....or something. God, what a concept.

Anyway, I'm dying for the next issue. I'm also dying to finish this semester of school and get some heavy comic reading/blogging done. Not to mention the fact that I need to start drawing again. Till tomorrow.. I swear! I'll update tomorrow! Don't hit me!