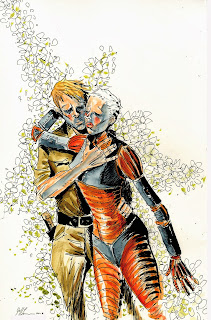 Look at me slowly catching up on things! Sadly I suppose I'm sinking into a little of the winter blues less affectionately known as depression. Winter is coming, fire and ice.. yadda yadda. Without making reference to long-winded novels and bastadized television productions of such sagas, I will attempt to bang out a little blurb about Trillium.

I can't help but get a little depressed when I read an issue, as the characters have so much hope yet their situation is all so hopeless. Genocide tends to win. In addition, for something so full of sci-fi awesomeness, which generally implies more technology than spirituality, this story is awfully spiritual. I don't want to say this is like Avatar because it's not. It's not Pocahontas in space. There is an alien race being threatened. There is a love story between two different cultures, two different languages, but they are not trying to wipe each other out. Instead an entire other race is facing annihilation at the hands of humanity who faces annihilation at the hands of Caul. Yet two people falling for each other are separated by time. You could make a parallel to the above stories mentioned, that the female love interest is in a technologically advanced age compared to the male.. so that makes it the opposite of Avatar (and Pocahontas). Ah damn, look what I did!? I said I was not going to compare and I did anyway. Well I said I did not want to compare… so technically I did not lie.

Normally I don’t read other people’s reviews of the material I decide to write about. In this case I might take a look because I have a sneaking suspicion that people are just going to dismiss Trillium as Avatar-fan-fodder. I really hope that is not that case. I’ll check in about it at a later date.
Posted by The Frog Queen at 10:20 AM